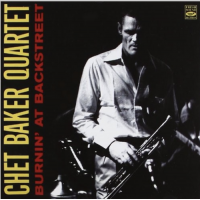 slideshow
Drummer Artt Frank first heard Chet Baker on Armed Forces Radio while aboard the U.S.S. Des Moines toward the end of the Korean War, in 1953. The following year he went to see the trumpeter at George Wein's Storyville in Boston and spoke to him afterward. Baker was kind to Artt, and Artt responded to the poetic depth of Baker's music and transparency of his personality.

Fast forward to 1968. Artt was in Los Angeles driving to a gig playing behind organist Groove Holmes when he passed the marquee at Donte's. Chet Baker was in town. By then, the trumpeter was a mess. Drugs, an Italian prison and a 1966 beating in Europe had taken a toll. Frank caught Baker's gig, invited Baker and his wife, Carol, over to the house for dinner with his wife, Earla. The rest is in Frank's smoothly written and passionate memoir, Chet Baker: The Missing Years.

What's enlightening about the book is that instead of Baker the junkie, Baker the chiseler and Baker the nasty piece of work who turns up in other oral and written recollections, we get to know Baker the gentle, kind-hearted soul who was compassionate and caring. Baker also remained loyal to Artt, and the pair gigged together in the 1980s. [Photo above of Artt Frank]

Two of their dates were recorded, on Burnin' at Backstreet (February 19, 1980) and on Live at the Renaissance II in Buffalo, N.Y. (November 11, 1984). On both recordings, Chet is lyrical and forceful, while Frank plays brushes with a firm swirl and snap. As Frank told me in an email: “Chet told me he really liked my dynamics and transmission, that I played brushes at stick level and sticks at brush level.'

On Live at Renaissance II (CD Baby), Baker is backed by Sal Nistico (ts), Lorne Lofsky (g), Chris Connors (b) and Art (d). The songs are Stella by Starlight, I Remember You, Nightbird, I'm Old Fashioned and Hal Galper's Margarine. Baker sings on a pair, but his voice is a mere shadow or what had been.

As Art continued in his email, “I recently finished the final edit of my second memoir and sent it off to the publisher. Actually, its a continuation of the first. The publisher felt the original book was too long and decided to make it two books." If it's anything like the first, I can't wait to read it. [Photo above of Artt Frank]

As for that second T in Artt's name, I'll let Artt tell it: “Chet said, 'I have three cats named Art in my address book, and every time I call you I get Art so-and-so or the other Art. Add another T to your name so it stands out.' I did, and Chet was right. I got a lot more attention."

JazzWax tracks: Here's Stella by Starlight from Burnin' at Backstreet...