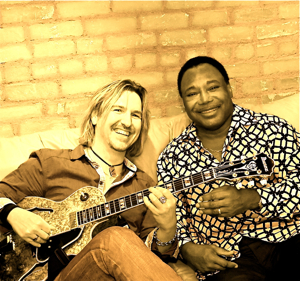 Los Angeles, CA—"The man known as U-Nam, is destined to become one of the most controversial musicians.It's great to have a new voice on the guitar scene; one that is loaded with energy and excitement."—-Ten time Grammy Award recipient, NAE Jazz Master and guitar legend—- George Benson

Chart Topping Jazz Artist U-Nam (best known for his #1 hit “Street Life") is currently in the studio recording and producing his next project. Paying tribute to his hero and favorite artist George Benson, U-Nam will be releasing the album Weekend in L.A. (A George Benson Tribute ) as U-Nam & Friends.

The album includes a MEGA-ALLSTAR line up of artists and musicians including but not limited to Patrice Rushen,Tim Owens, Mike White, Ricky Lawson, Matt Rohde, Jeff Lacey, Franck Sitbon, Denis Benarrosh, Darryl Williams, Andreas Oberg, Marva King, Najee, Stokley ( Mint Condition ) and Many more artists will be revealed later—there are many surprises to be expected.

According to U-Nam, with this new project, one can, “Expect the Unexpected!!!" U-Nam also mentionned that this will be the “Best, Biggest, Most Exciting and Intimidating project of his life." He also added, “before I even started to record any music on this project, my first thought was to call George [Benson], let him know about the project and ask for his blessing. I got more than I expected when he told me this, 'Man, for sure you have my blessing and anyway whatever you're gonna do it's gonna sounds fantastic.' After that I felt relieved and incredibly motivated to do a great hommage to GB!" The album is going to follow in the footsteps of “GB"; a mix of Jazz, R'n'B, Pop, Soul and full of innovation.

The full album is due to be released Fall 2011. The first single will be out in a couple of months closely followed by another single with remixes.

More news will be on the way through U-Nam's website featuring information about the “making of" the album, guest artists' names will be revealed, as well as clips and interviews of U-Nam talking about this exciting new project.

As said and recorded by Jeff Lacey , “GB's the King, U-Nam's the Prince"