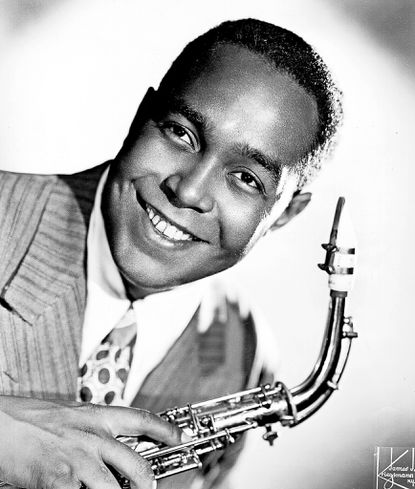 slideshow
August 29 will mark Charlie Parker's centenary—the 100th anniversary of his birth. The alto saxophonist was a critically important revolutionary and remains essential listening today for five historical reasons: First, he helped invent bebop in 1945, a jazz form that shifted the focus from bands and bandleaders to individuals. Second, he helped invent a new way of playing based on high-speed improvisation. Third, he lyricized the blues, creating dozens of new memorable melodies. Fourth, he united modern jazz and pop by recording the first commercially successful songbook jazz-pop album. And fifth, he helped launch the civil rights movement by creating a Black idiom that showcased Black talent and enabled Black musicians to express artistic exceptionalism without having their contribution marginalized or stolen.

This week, I'll be looking at Charlie Parker's five qualities and innovations. Today, the focus is on Parker's launch of bebop with Dizzy Gillespie in 1945 and an upcoming Parker festival you can enjoy from home.

Among the first bebop recordings by Parker and Gillespie was Groovin' High for Guild records on February 28, 1945. Backed by Clyde Hart (p) Remo Palmieri (g) Slam Stewart (b) Cozy Cole (d), they recorded Groovin' High, a new melody, based on the chord changes to Whispering. Here's Paul Whiteman's original 1920 recording of Whispering...

Parker and Gillespie's next bop studio session for Guild was on May 11, 1945, when they recorded Tadd Dameron's Hot House, based on the chord changes to Cole Porter's What Is This Thing Called Love? Here's English singer Elsie Carlisle, the first to perform the song on May 1, 1929...

On November 26, 1945, Parker and trumpeter Miles Davis, with Dizzy Gillespie on piano, recorded Ko-Ko for Savoy Records. They were backed by Curly Russell (b) and Max Roach (d). Parker's Ko-Ko was a sophisticated reworking of Cherokee's chord changes. Here's Ray Noble's original Cherokee in 1938...

Why did bop pioneers initially use the chord changes of popular songs from well-known Broadway musicals? While melodies are protected by copyright laws, chord changes are not. It was considerably less costly for Parker, Gillespie, Dameron and other gifted jazz musicians to come up with completely different melodies for songs using hit chord changes. In most cases, their new melodies were as good if not better than the originals.

Celebrating Charlie Parker. Want to watch a jazz festival at home from anywhere in the world on August 28 and 29 dedicated to the music of Charlie Parker? The series includes a free streaming of Clint Eastwood's Bird (1988).

Check out the Parker music, film, dance, art and in-conversation events being held online by 92Y, one of New York's foremost cultural institutions. For information and to register for the events listed below, go here.

Here's the schedule for 92Y's Charlie Parker: Now's the Time, Celebrating Bird at 100: