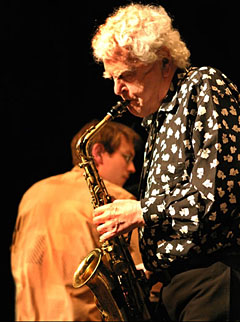 slideshow
Charlie Mariano, 85, an alto saxophonist best known for his association with Stan Kenton's big band in the 1950s, his playing on two albums by Charles Mingus in the 1960s, and his later stint in Europe with Eberhard Weber's jazz-rock group Colours, died Tuesday of complications from cancer at a hospice in Cologne, Germany, according to his website.

A native of Boston, Mariano served in the Army during World War II and began studying music at what is now the Berklee College of Music after the war.

He had two stints with Kenton in the early 1950s before moving to Los Angeles, where he played with trombonist Frank Rosolino and in drummer Shelly Manne's group.

Mariano married pianist/band leader Toshiko Akiyoshi in 1960, a union that produced one album, “The Toshiko-Mariano Quartet." They lived for a time in Japan, had a daughter and divorced in 1967.

Before moving to Japan, Mariano played on two of Mingus' seminal recordings, “The Black Saint and the Sinner Lady" and “Mingus, Mingus, Mingus." He also taught at the Berklee School of Music and briefly led a jazz-rock group called Osmosis.

He moved to Europe in the early 1970s, living first in the Netherlands and then Germany. He led the group Pork Pie with guitarist Philip Catherine and pianist Jasper van't Hof and played with a number of fusion bands.

Over the years, Mariano also became interested in South Asian music, learning the nadaswaram, a wind instrument, while on a visit to Malaysia. He returned to South Asia time and again to hone his skills