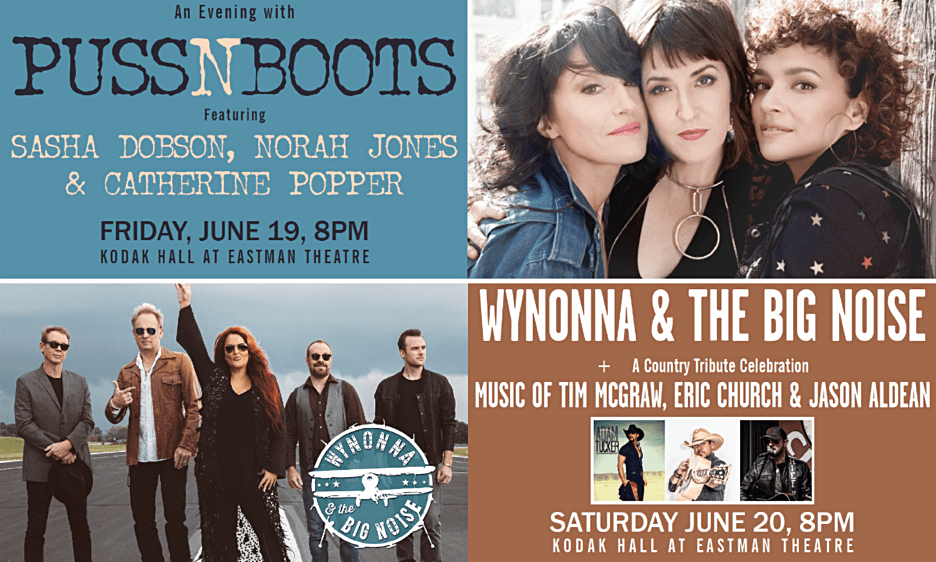 Watch for the festival's full lineup announcement including the Club Pass Series and free shows on March 17. Save the dates for our 19th Edition spectacular June 19-27th! —John Nugent, Producer

Puss N Boots—featuring Sasha Dobson, Norah Jones & Catherine Popper will perform on Friday June 19. Puss N Boots first formed in 2008 as a live band performing around Brooklyn. With a repertoire anchored in Americana, country, folk, pop and rock, the band became an outlet for Jones, Dobson and Popper to switch instruments and allowed them to showcase a different side of themselves than on their various solo and side projects. Tickets are $83/$73/$53/$33 + service charges.

Wynonna & The Big Noise Saturday June 20. Wynonna Judd and her band The Big Noise, is led by Judd's husband drummer/producer, Cactus Moser. Respected by the millions of fans who are drawn to her music and undeniable talent, Wynonna’s rich and commanding voice has sold over 30-million albums worldwide spanning her remarkable 34-year career. Opening for Wynonna & The Big Noise is Country Tribute Celebration The Music of Tim McGraw/Eric Church & Jason Aldean. Tickets are $73/$63/$53/$33 + service charges.

Tickets for these shows and previously announced headliners Spyro Gyra, Nile Rodgers & CHIC, and Garth Fagan Dance & Monty Alexander are available exclusively at RochesterJazz.com or by calling (585) 454-2060. Three and nine-day Club Passes are also on sale. Prices increase March 17. The Club Pass is the festival's popular value pass to discovery, with access to more than 228 Club Pass shows at a record 13 Club Pass venues.

﻿The festival's 19th edition will be held June 19 to 27, 2020 featuring more than 325 shows and 1750 artists performing in multiple indoor and outdoor venues in downtown Rochester, New York. The 2019 festival wrapped up with attendance of more than 208,000.

All headliner shows are at 8 PM at Kodak Hall at Eastman Theatre. The full lineup including the Club Pass Series and free shows will be announced March 17.

Puss N Boots first formed in 2008 as a live band performing around Brooklyn. With a repertoire anchored in Americana, country, folk, pop and rock, the band became an outlet for Jones, Dobson and Popper to switch instruments and allowed them to showcase a different side of themselves than on their various solo and side projects. After years of live performances, the trio made a full-length album which resulted in their 2014 debut No Fools, No Fun. Comprised of originals and covers, studio recordings and live performances, the album was praised by  Rolling Stone, Paste, American Songwriter and led to TV performances on  The Tonight Show with Jimmy Fallon and  CBS This Morning.

Norah Jones first emerged with the 2002 release of  Come Away With Me , her self-described “moody little record” that introduced a singular new voice and grew into a global phenomenon and swept the 2003 GRAMMY Awards.

Sasha Dobson is a dynamic New York jazz singer, songwriter and multi-instrumentalist. She grew up in a family of accomplished jazz musicians including her father, the great pianist Smith Dobson (Red Holloway, Bobby Hutcherson, Art Pepper); her mother, the endearing and sought-after jazz vocalist and educator, Gail Dobson; and her brother, multi-instrumentalist and prodigy of jazz drums, Smith Dobson.

Respected by the millions of fans who are drawn to her music and undeniable talent, Wynonna Judd's rich and commanding voice has sold over 30-million albums worldwide spanning her remarkable 34-year career. As one-half of the legendary mother/daughter duo “The Judds," Wynonna was once dubbed by  Rolling Stone as “the greatest female country singer since Patsy Cline." This iconic performer has received over 60 industry awards, with countless charting singles, including 20 No.1 hits such as “Mama He’s Crazy,” “Why Not me,” and “Grandpa, (Tell Me ‘Bout The Good Ole Days).”

Wynonna and her band The Big Noise, led by her husband drummer/producer, Cactus Moser, released their debut full-length album in February 2016 via Curb Records to critical acclaim. Wynonna has described the new sound as “vintage yet modern” and a “return to the well.” It’s a rootsy work encompassing country, Americana, blues, soul and rock. The album features special guests Derek Trucks, Jason Isbell, Susan Tedeschi and Timothy B. Schmit. NPR’s Ann Powers noted that, “With her tight band behind her after touring together for several years, she just sounds like she’s home…You can just feel the grin on her face.”

﻿Founded in 2002, attendance has grown from 15,000 in 2002 to 208,000 in 2019. In addition to a headliner series and Club Pass Series of 228 shows, the festival presents more than 100 free shows and events including workshops for music students and nightly jam sessions. The RIJF jazz scholarship program has awarded almost $500,000 in scholarships to 40 students entering Eastman School of Music since 2002.

The CGI Rochester International Jazz Festival is produced by RIJF, LLC, a privately held company owned by John Nugent and Marc Iacona. Nugent, Producer and Artistic Director, is a noted tenor saxophonist, who has traveled the world with many jazz artists including Tony Bennett, Ella Fitzgerald, Rosemary Clooney, The Woody Herman Orchestra and The Vanguard Jazz Orchestra. Marc Iacona, Producer and Executive Director, is a Rochester native and President of Simcona Electronics. A business and community leader, he is an avid trumpeter and supporter of the arts.