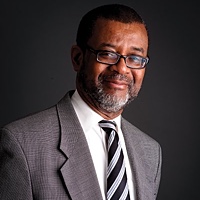 Dover, NJ: Cephas Bowles, a staunch advocate for public radio and jazz for more than four decades and recently-retired CEO/President of WBGO Jazz 88.3 FM, died on Saturday, February 21, in Hackensack.

His death, at Hackensack University Medical Center Hospital, followed complications from a stem cell transplant, said his wife, Linda. He was 62.

A native of Newark and a resident of Dover, NJ, Bowles served as senior executive of WBGO-FM from 1993 to 2014, when he retired following a medical leave. During his tenure, the station celebrated increased financial support as well as heightened listener engagement through innovative programming, special events, live broadcasts and social media. In 1998, WBGO became the first jazz station to use the Internet to stream music around the world. Under Bowles' leadership, Jazz 88.3 also increased the number of professional staff and totally renovated its two-story office building. In 2012, he spearheaded a capital campaign that funded, built and began transmitting from a tower in midtown Manhattan, which significantly strengthened the station's metro-area reach.

A broadcast, philanthropic and non-profit management consultant, Bowles was a long- time member of the National Public Radio, Inc. (NPR) Board of Directors. He also served as President of Eastern Public Radio, a consortium of NPR-affiliated public radio stations, which contains some of the most important and largest public radio stations including WNYC, WETA, WAMU, WGBH and WBGO. Beginning in 1994, he worked on numerous task forces and committees with, among others, NPR, Corporation for Public Broadcasting (CPB) and the New Jersey State Council on the Arts. Bowles also offered his expertise to various community Boards, including the Newark Arts Council, Dover Zoning Board of Adjustment, State of NJ Martin Luther King Committee, National Jazz Museum of Harlem and Newark Regional Business Partnership.

Cephas Bowles was born April 20, 1952. He graduated from Newark’s Barringer High School and went on to receive a Bachelor of Science Degree in Radio-Television Broadcasting from Syracuse University (1974) and a Master of Business Administration from the University of Arizona.

It was at the Syracuse campus station, WAER, where he developed his love of music and passion for radio. One of the first trips he made after his transplant was to attend the September 2014 induction ceremony for the WAER Hall of Fame. His name was added to a prestigious list of previous inductees including Ted Koppel, Mike Tirico, Sean McDonough and Ian Eagle, who have made a mark on the field of broadcasting.

Prior to the Hall of Fame ceremony, Bowles recalled, “WAER was located in an old Quonset hut across from the University's gymnasium. Many talented students worked at the radio station to present and produce music, news, drama and spoken word. We learned from each other. Teenager Bob Costas was our Chief Announcer. Bloomberg News Executive Steve Geimann was our News Director. Syracuse mega-broadcast station owner Craig Fox was one of our very talented engineers. I wanted to be a music announcer and, with another student, learned about jazz by building the station's first, and at that time, most complete jazz library. I was also the first African-American student engineer in the station's history.”

Starting as a Program Assistant at the University of Arizona’s two NPR affiliates in 1979, Bowles became the Program Director at KUAT in 1981. He went on to become the Assistant General Manager and Station Manager in 1983, holding that position for six years. He became the CEO and Acting Director for the Tucson station in 1989. Returning to Newark in 1993 to run WBGO, the country’s foremost, full-time, classic jazz radio station in the New York City market, Bowles’ business acumen allowed him to spearhead and change the financial trajectory of the station. He held the station’s General Manager position for 16 years and became President and CEO in 2009. A master problem solver and innovative thinker, he was able to take the station from financial distress to solid ground. In addition to overseeing the new tower and major building renovation, he and his development staff raised the largest corporate grant in the station’s history. He led the market’s most diverse public broadcast station and set it firmly on the path to a secure future.

In addition to management positions, Bowles also worked in production over the years. He was Executive Producer of the first-place winner in the cultural category for “The Unknown West,” a 30-minute documentary about Black cowboys in Arizona (1982). His documentary “Cowboy Humor” won Best of the West Award from Washington State University in 1981, and his 30-minute public affairs documentary on Juneteenth earned an Associated Press (Radio) award in that same year.

Bowles was the recipient of countless other awards including a Jazz Hero Award from the Jazz Journalists of America (2014); the New Jersey Performing Arts Center Ryan Community Service Award (2013); WBGO Champion of Jazz Award, (2013); Syracuse University Jazz Leadership and Alumni Jazz Appreciation Society awards (2012). Other honors included Recognition Award from NPR for six years of service as a member of the NPR Board of Directors and Chairman of the Investment and Finance Committees (2007); Associates in Mental Health and Developmental Disabilities, Inc. Executive Leadership Award (2006); Newark School of the Arts Shining Star Award (2006); Eller MBA Alumni Achievement Award from the University of Arizona's Karl Eller Master of Business Administration Program (2004). The Newark Star-Ledger named him one of New Jersey’s most influential arts leaders (1998) and the City News tapped him as one the 100 Most Influential people (1997).

Bowles was never far from a radio. If he wasn’t knee-deep in solving problems or advocating for public radio, he was listening to the music, following the news or raising funds to help keep the music alive.

“As we spent our last few hours together, Cephas was comforted by the sounds of jazz wafting throughout the room,” said Linda Bowles, his wife of nearly 18 years. “He bobbed his head and tapped out the beats with his finger while his beloved WBGO played to the very end.”

Over the next few days, WBGO will dedicate music in Bowles’ memory and reflect on his outstanding leadership, the station announced. WBGO also has a tribute page on its website where friends and music lovers are invited to pay homage and remember the public radio giant.

Philip Elberg, former WBGO Board Chairman, wrote on the tribute page, “I met Cephas the day he was interviewed at my office for the General Manager job at WBGO. At the time, the station was increasingly popular, but it was broke. It needed strong leadership – someone who would pay attention to the details and provide the professionalism that would help WBGO become the lasting institution with diverse leadership that we envisioned … He was a wonder to behold. He made the ‘trains run on time.’ He was driven in his commitment to the station ... He was passionate about the music, about Newark and about the station and nobody who knew him and listened to him could ever doubt his passion, his commitment or his sincerity. He taught us all a lot about how to build an institution and I will always remember his enthusiasm, his dedication and his honesty which permitted him, when he became ill, to turn the station over to the current Board and leadership in far, far better shape than it was on the day he arrived.”

Cephas Bowles represented Newark and jazz to the fullest, and he was proud to be a part of the City and the area’s cultural institutions, leaving an indelible imprint on the music industry and the world.