SOURCE: ALL ABOUT JAZZ PUBLICITY
April 6, 2018
Sign in to view read count 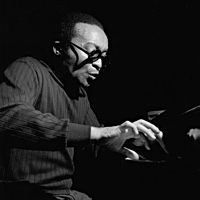 slideshow
We compiled several Tweets about pianist Cecil Taylor's profound impact on others through his music and his friendship. Scroll to the bottom and click the link to read more.

Thanks to Cecil Taylor for his creative courage and his uncompromising vision of what music can be. We mourn his passing but celebrate his life.

No one touched the piano like Cecil Taylor. The force, the delicacy, the miraculous tone clusters. But the word that comes to mind, most of all, with his passing, is courage. He was fearless and so was his playing. He transformed our sense of music, of art, of life itself. https://t.co/A44ymh6Wv0

RIP Cecil Taylor. I took this picture at the @whitneymuseum when I spent two days with him for @thewiremagazine. One of the greatest experiences of my writing life. pic.twitter.com/oweCkOnUam

“You know, when you see a really great artist, all time stops . . . Empires fall, but the highest achievements of empires are really what the artists create within them. Some art work transcends the dominance of empires."
– Cecil Taylor (1929–2018)

nooooooo... cecil taylor... thank you so much for everything you brought into the world and staying true until the last years... your presence will be resonating for a long long time to come... playing with you was absolutely one of the highlights of my life... rest in peace...

“Cecil Taylor told a New York Times reporter “[s]omeone once asked me if I was gay. I said, 'Do you think a three-letter word defines the complexity of my humanity?' I avoid the trap of easy definition."

There was an unbelievable amount of beauty in the music of Cecil Taylor. I only saw him half a dozen times, but each one was a rare privilege, and burns like an ember in my mind. #RIP

Rest in power, jazz pioneer Cecil Taylor. Saw him play a few years ago and it was like an ocean of music washed into the room. Here I am sitting at his feet at a party with poet Joanne Kyger at @NaropaU in Boulder in 1994. pic.twitter.com/l8Igq7wODB

8 years ago I drove 9 hours to Albuquerque just to watch Cecil Taylor play for maybe 30 minutes. It was a powerful spiritual quest and I am richer for it and for all of his art. My hero. R.I.P. pic.twitter.com/PgOWZbMB8q

If you wanted to hear Cecil Taylor play live, you’ve missed your chance. But, the good news is that there are thousands of artists who make art because of his art. Witnessing their art is a beautiful opportunity to witness the value and power of life in art pic.twitter.com/xflE8eVpuu