SOURCE: ALL ABOUT JAZZ PUBLICITY
November 27, 2007
Sign in to view read count 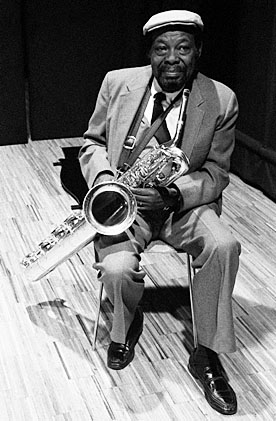 Born in Brooklyn on December 14, 1922, Cecil Payne proved one of the bebop eras strongest baritone saxophonists; nonetheless, he has always worked in undeserved obscurity. After leaving the military service in 1946, Payne cast aside the guitar, alto, and clarinet to pick up the bari for a brief stint with Roy Eldridges Big Band. Payne soon joined the most progressive big band of the era, Dizzy Gillespies, where he made his reputation as a fluid player on a sometimes cumbersome instrument and played on the orchestras groundbreaking recordings, including Cubano-Be/Cubano-Bop. Payne later freelanced in NYC with Tadd Dameron and Coleman Hawkins ('49-'52), later working with Illinois Jacquet ('52-'54). Payne had remained highly active during the decades since; even though his eyesight had begun to fail him, his songful sax, flowing lines and warm tone, remained fully intact well into his 80's. He was a childhood friend of Randy Weston's and they remained very close to this day. His friend Art Bailey was a major influence in his musical comeback and his life in the Greater Philadelphia area.

Cecil Payne was one of the truly great human beings on this Earth. His positive attitude and his endlessly optimistic nature, no matter how bad things were, always got you a “It is what it is" and an “Everything is Everything" and never a complaint or a negative word was uttered from his mouth. The Earth is a little emptier from his passing.

About 6 years ago, Cecil had gone into seclusion because his eye sight was failing and he didn't want to bother anyone. Ron Carter ran into Wendy Oxenhorn from the Jazz Foundation of America and said, “I'm worried about Cecil. No one has seen him in a year." The Jazz Foundation called him up, spoke to him, he said he was “fine" and didn't need any help. He admitted that he had been going blind, and being the independent strong soul that he was, could only walk as far as the local corner deli and was living on 2 cans of Slimfast and some M & M's for over a year and a half. After hearing that, Wendy tried to tell him that they could at least get “Meals On Wheels" delivered to his home and he'd get a wonderful meal each day- but he wouldn't hear of it. The next day, Wendy called him and said, “Cecil, I was up all night worried about you- please would you let us try the Meals on Wheels just once." Cecil said, “Well, I don't want you to worry about me and “Meals On Wheels" sounds cool..." as he said slowly in his Cecil way, “Meals...on Wheels..."

Because of these nutritious meals his health improved, he came out of seclusion and started to play again in New York City at Smoke with Eric Alexander, Harold Mabern, Joe and John Farnsworth, John Webber and others he loved dearly. Minoru Odamaki was very helpful as well setting up gigs in New York and even driving him two hours away to the gigs. Now in his 80's, Cecil had the chance to play the Annual “Great Night In Harlem" Benefit Concert for the Jazz Foundation at the Apollo, where he was reunited with many old friends, seeing one another after all those years, like Quincy Jones, Ron Carter, Frank Foster, Freddie Hubbard, Candido, Ray Baretto, Clark Terry, Frank Wess and so many others. You would have thought he was 25 again if you had seen his face light up when being reunited with his peers. After this, Cecil found time to perform in the local nursing homes in the Somerdale area, entertaining elderly patients for free.

The Jazz Foundation became very close to Cecil, like family, and found other ways to make his life easier, along with another blessing that came into his life: his landlord Bucky Buchman, who knew and loved Cecil for over 20 years. Bucky also stepped in and along with his assistant Tony Bassett and Ian Greenan, who lived close by, they watched over him like he was part of the family and he was never really alone again. This past year Cecil spent in a nursing home with this extended family looking in on him several times a week. Never complaining about the pain of his Cancer, never a negative word, just the same optimistic Cecil who would say, “The Sun is Up and so am I, it's a good day."

This morning, he got to do just that. He passed at 6:30 AM, he did not die alone. Bucky called to say “he's gone." The sun came up this morning and Cecil rose with it.