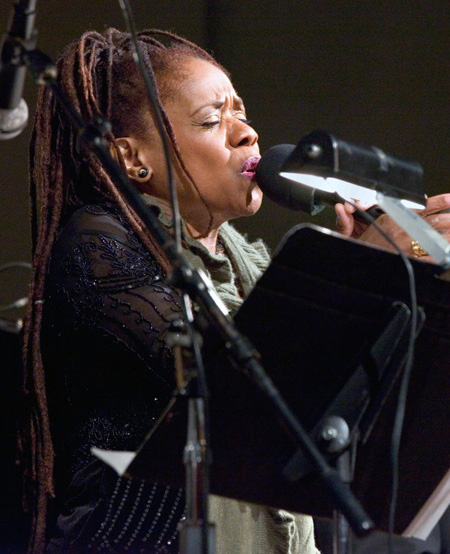 slideshow
This week on Riverwalk Jazz, Catherine Russell joins The Jim Cullum Jr. Jazz Band with frequent guest artist Dick Hyman on piano, at the historic Pearl Stable in San Antonio. They present a selection of songs from Catherine's recent CDs. Catherine talks about her beginnings as the daughter of a pioneering woman of jazz, to what she looks for in choosing songs and how she feels the spirit of her father in her music.

The program is distributed in the US by Public Radio International, on Sirius/XM sattelite radio and can be streamed on-demand from the Riverwalk Jazz website.

You might say that Catherine Russell was born with music in her blood. Her father Luis Russell was a star bandleader and arranger of the Swing Era and music director for Louis Armstrong on his rise to stardom. Her mother, the multi-instrumentalist Carline Ray, played guitar with the iconic WWII-era “all-girl" band, The International Sweethearts of Rhythm, and was Mercer Ellington's bassist and vocalist.

Long before launching her own solo career in jazz, Catherine Russell was a “first-call" backup singer—working with artists in just about every genre of music from pop to rock, from blues to country. Ms. Russell has performed or recorded with an impressive array of trend-setting artists, including Rosanne Cash, Cyndi Lauper, Michael Feinstein, Madonna, Al Green and Isaac Hayes. At heart, she is a genuine jazz and blues singer.

View video highlights and a photo gallery from this concert at San Antonio's Pearl Stable here.

Since the release of her first CD in 2006, rave reviews have poured in from the Wall Street Journal, Village Voice, and Down Beat. A recent CD, Inside This Heart of Mine, topped the jazz radio charts.

On our show this week Catherine interprets one of the last songs composed by Alec Wilder, “South to a Warmer Place" in a stunning duet with Dick Hyman. Another outstanding piece is “Troubled Waters," from Ivie Anderson with the Duke Ellington Orchestra. The old blues, “Spoonful" from Howlin' Wolf gets an interesting treatment with Catherine's vocal, Jim Cullum on cornet, Howard Elkins' banjo, and Mike Waskievich's antique “flower drum."

Catherine with Dick on piano and the full Jim Cullum Jazz Band close the show with a classic Bessie Smith tune that is a tour-de-force of double-entendre, “Kitchen Man."