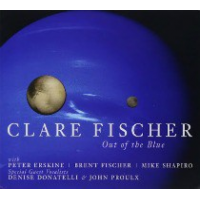 slideshow
As the hours left in 2016 dwindle, we briefly acknowledge a few of the hundreds of albums that have accumulated this year at Rifftides world headquarters. Many releases stacked up without reviews. This does not indicate that they are unworthy, only that there are limits to how much music the linear process of listening can accommodate. Science has yet to come up with digital downloading directly into the brain, but I’ll bet someone is working on it.

Clare Fischer, Out of the Blue (Clavo Records).

This album slipped beneath the incoming waves of CDs more than a year ago. I am delightedthat it surfaced. Fischer (1928-2012) was a brilliant pianist, composer and interpreter of music by others. His son Brent put together Out of the Blue as he researched his father’s archives. He recruited drummers Peter Erskine and Mike Shapiro to alternate in accompanying piano tracks that Clare Fischer recorded before his death. Overdubbing, Brent plays bass and percussion. Singers Denise Donatelli and John Proulx provide vocalese lines on the title track. Among the delights of this bonus to the elder Fischer’s legacy:

His unaccompanied medley of “When You Wish Upon a Star” and “Someday My Prince Will Come.”

The two in Django Reinhardt’s “Nuages,” which manages to be both muscular and—thanks to Erskine’s brush work—delicate.

An early 1960s piano sketch taped by Fischer per that he ultimately transformed into “Novelho.” The free flow of his improvisation on this is a high point.

Abbey Lincoln, Love Having You Around, Vol. 2 (High Note)

The late singer (1930-2010) recorded this intimate album during an engagement at San Francisco’s Keystone Corner in the spring of 1980, a decade before the flurry of releases that brought her renewed fame. Lincoln’s combination of toughness and tenderness was fully engaged in the urgencies of the Stevie Wonder title song, “When Malindy Sings,” the slavery lament “Driva Man” and in “Throw It Away.” Warmheartedness and Billie Holiday inflection guide “Little Girl Blue.” She presents her own “Rainbow” and “Throw It Away” as pieces of a poetic optimism that also informs John Coltrane’s “Africa,” which has Lincoln’s lyric (…”this land of milk and honey on the river called the Nile…”). The final track is two minutes of Lincoln singing introductions of pianist Phil Wright, drummer Doug Sides and bassist Art Washington. San Francisco veteran James Leary plays bass on all the other tracks.

Pianist and composer Bedikyan, a native of Turkey, has established himself among an elitecircle of New York jazz artists. His colleagues on Awakening are alto saxophonist Loren Stillman, bassist Ugonna Okegwo and drummer Donald Edwards. Bedikyan’s playing and some of his compositions reflect his roots in bebop, his classical training and his Middle Eastern origins. If “Memory Of A Fading Dream” was intended to evoke his heritage, it succeeds in creating an exotic atmosphere that Tillman and Bedikyan expand on in their solos, energized by Edwards’ strategically and delicately placed cymbal splashes. In his third Steeplechase album, Bedikyan has grown impressively.

Jazz improvisation at its best is a listener’s art. There are few better illustrations of that truth than Hall playing off the power and sensitivity of Mitchell’s bass lines and Mitchell making instant accommodation to Hall’s often unexpected turns of phrase and harmonic shifts. Highlights: Charlie Parker’s blues “Now’s The Time,” a lengthy exploration of Billie Holiday’s “God Bless The Child,” and stunning interpretations of “Stella By Starlight” and Sonny Rollins’s “Valse Hot.” Originally recorded for John Snyder’s ArtistsHouse label, the album captures the guitarist and the bassist at the top of their duo game. Thirty-eight years on, it is as fresh as the day it was issued.

Laurie Pepper continues to release unissued recordings by her late alto saxophonist husbandArt. Her latest installment is from Pepper and tenor saxophonist Warne Marsh in their 1974 engagement at the lamented Los Angeles jazz stronghold Donte’s. On three CDs the saxophonists and a stalwart rhythm exercise their formidable energies and imaginations in standard songs and bebop standbys. In their contrasting approaches,

Pepper and Marsh were two of the most daring improvisers of the second half of the twentieth century. Pepper got plenty of acclaim and basked in it. Marsh, a borderline recluse, maintained a low profile and kept quiet except when playing. Both do astounding (term used advisedly) up-tempo work on “Donna Lee.” In “Rhythm-a-ning,” they interlock horns like a pair of bull elk in mating season. Ballad relief comes in ”What’s New?” and “’Round Midnight;” both saxophonists are contemplative in comparison with their fast pieces, although Pepper’s edginess doesn’t quite subside. In a blazing “Cherokee,” pianist Bill Mays sits in for Mark Levine. John Heard is the bassist throughout, with Lew Malin on drums. One must wonder what Laurie Pepper will come up with next in her continuing Art Pepper retrospective.