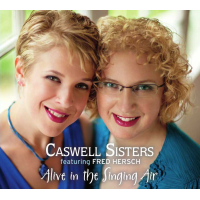 After establishing thriving careers under their own names over the last ten years, sisters Rachel and Sara Caswell have increasingly turned their attention to the musical bond they’d shared since childhood. Vocalist Rachel and violinist Sara first approached Fred Hersch back in 2008 about working with them on a joint project as pianist and co-producer. The results of their collaboration may be heard on Alive in the Singing Air, a breathtaking collection of songs featuring Hersch, one of jazz’s most celebrated pianists, with support by bassist Jeremy Allen and drummer Bryson Kern. The CD will be released on March 5 by the sisters’ Turtle Ridge Records.

“Both of us are drawn to Fred’s style and sensitivity,” Rachel says. “He creates such an easy foundation to play on, and he loves working with singers. It was a dream.”

“Violin and voice is not exactly your standard front-line in a jazz quintet,” observes Hersch in his CD booklet notes. “. . . What sets the Caswell sisters apart — aside from their superb musicianship and their taste in repertoire — is the uniqueness of their blend.”

Surprises abound in the sisters’ repertoire choices. Two Hersch compositions with lyrics by British jazz singer Norma Winstone — “Song of Life” and “A Wish” — are especially fine fits. In a nod to their Bloomington, Indiana roots, the Caswells include Hoagy Carmichael’s “I Get Along Without You Very Well,” and their version of Nancy King’s samba “I Sing for You” goes out to King, one of Rachel’s favorite singers.

“Rachel and I seek out those pieces with interesting twists and turns harmonically,” Sara says. “We love beautiful soaring melodies that go in unexpected directions, but feel very logical. ‘Sweet Adelphi’ [by saxophonist Christine Jensen] is a great vehicle that really lets our timbres sync together.”

Rachel Caswell (b. 1973) and Sara Caswell (b. 1978) grew up in a seriously musical household, the daughters of two academics with doctorates in musicology. Their parents’ scholarship was matched by a commitment to performance. “They exposed us to so many styles of music,” Rachel says. “We studied early music, classical repertoire, piano, and played in high school band, jazz band, and orchestra as well as performing in a family trio. Eventually jazz is what stuck and became our identity.”

As children the sisters studied with the distinguished jazz educator David Baker, a longtime Indiana University music professor, and both attended IU on full scholarship. They both graduated with High Distinction in Classical Performance and Jazz Studies, and went on to earn Master’s degrees in Jazz Performance (Rachel at Boston’s New England Conservatory and Sara at Manhattan School of Music).

Based in her hometown of Bloomington, Indiana, Rachel Caswell has performed in a wide array of jazz settings, including the Glenn Miller Orchestra, John Blake Jr., Ingrid Jensen, the Billy Taylor Trio, and Curtis Fuller. Her debut recording, Some Other Time, was released in 2003.

Sara Caswell, a resident of Manhattan, has toured and performed with Esperanza Spalding, Gene Bertoncini, Roseanna Vitro, Regina Carter, and John Clayton, in addition to performing with the New York Pops Orchestra. Sara was recognized in the 2011 and 2012 JazzTimes Readers’ Poll as one of the top jazz violinists. Her 2000 debut First Song and 2005 follow-up But Beautiful both feature Rachel’s vocals.

“When I think of the sound I like,” says Rachel, “Sara’s playing is what pops into my head. It’s the classic jazz quintet, translated into our own image.”

The Caswell Sisters will be performing a series of CD release shows in March, beginning with a “teaser” concert and discussion at Indiana University’s Hoagy Carmichael Room in Bloomington at 12:00 noon on 3/1. Other dates are 3/1 Jazz Kitchen, Indianapolis, IN; 3/3 First United Church, Bloomington, IN; 3/9 An Die Musik, Baltimore, MD; 3/13 ShapeShifter Lab, Brooklyn, NY; and 3/15 Acton (MA) Jazz Cafe. In addition, several New England and Midwest concerts are in the works for the coming summer and fall.