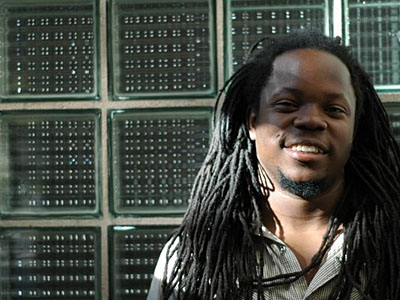 Jazz trumpeter and Blue Note recording artist Ambrose Akinmusire leads his big band for the ensemble's worldwide debut performance on Saturday, December 3, at 10:00 p.m. in Zankel Hall. The trumpeter, whose talents have been increasingly recognized since 2007 when he won both the Thelonious Monk International Jazz Competition and the Carmine Caruso International Jazz Trumpet Solo Competition, was signed to the Blue Note recording label in 2010 and was most recently named by The Los Angeles Times as one of their “2011 Faces to Watch." Akinmusire's big band features a host of modern jazz's most notable rising star performers, including: saxophonists Marcus Strickland, Walter Smith, Myron Walden, Tia Fuller, and Dayna Stephens; Sean Jones and Jason Palmer joining Akinmusire in the trumpet section; trombonists Josh Roseman and Cory King; pianist, Sullivan Fortener; bassist, Harish Ragahvan; and drummer Justin Brown with arrangements by Sherisse Rogers. This concert is presented by Carnegie Hall in partnership with The Joyce and George Wein Foundation in memory of Joyce Wein.

Ambrose Akinmusire's first album for Blue Note records, When the Heart Emerges Glistening was released in April 2011. Explaining the album's title he notes, ..."[the title] refers to being present, emotionally invested, honest-not exclusively in our art, but in every act of expression...[t]he many sides of the album itself are a testament to our complexity and uniqueness as individuals, and the imperative to bare and explore honestly every coexisting side of us." Co-produced by Akinmusire and his mentor, pianist Jason Moran, the album features the 28-year-old trumpeter's young quintet whom the The New York Times deems"destined for much wider recognition, “ performing mostly original compositions (written by Akinmusire) that juxtapose bombastic tunes and searing solos alongside selections that display elegance and sensitivity.

Prior to Akinmusire's performance, starting at 9:00 p.m., ticketholders are invited to enjoy Late Nights at Zankel, a laid-back pre-concert experience in the Zankel Hall lounge, and meet others who share their passion for music. The first 200 concert-goers to arrive will receive a complimentary drink courtesy of Carnegie Hall. For more information, please visit carnegiehall.org/latenights.

The discovery of trumpeter Ambrose Akinmusire (pronounced ah-kin-MOO-sir-ee) was a slow and steady process. Born and raised in Oakland, California, it was as a member of the Berkeley High School Jazz Ensemble that Akinmusire first caught the attention renowned saxophonist Steve Coleman who was leading a workshop at the school, and immediately recognized the young trumpeter's promise. Coleman eventually hired Akinmusire as a member of his Five Elements band, and invited him to embark on an extensive European tour when he was just 19. As a student at the Manhattan School of Music, the trumpeter was determined to discover his own voice. After pursuing a master's degree at the University of Southern California, he went on to attend the famed Thelonious Monk Institute of Jazz in Los Angeles after which he entered and won the prestigious Thelonious Monk International Jazz Competition from a panel of judges that included Terence Blanchard, Quincy Jones, Herb Alpert, Hugh Masekela, Clark Terry and Roy Hargrove. That same year he also won the Carmine Caruso International Jazz Trumpet Solo Competition and released his debut recording Prelude...To Cora (Fresh Sound/New Talent).

Upon moving back to New York City, Akinmusire began performing with Vijay Iyer, Aaron Parks, Esperanza Spalding, and Jason Moran-also taking part in Moran's innovative multimedia concert event In My Mind: Monk at Town Hall, 1957. It was also during this time that he first caught the attention of Bruce Lundvall, President of Blue Note Records, who says, “[Ambrose] is finding a very distinctive voice on his instrument, has a fantastic sense of adventure, and is dedicated to pushing the music forward." Lundvall signed Akinmusire, and in September 2010 the trumpeter brought his quintet into Brooklyn Studios to record When the Heart Emerges Glistening, his first album on the Blue Note label which debuted to critical acclaim earlier this year.

Presented by Carnegie Hall in partnership with The Joyce and George Wein Foundation in memory of Joyce Wein.

Tickets, $39 and $50, are available at the Carnegie Hall Box Office, 154 West 57th Street, or can be charged to major credit cards by calling CarnegieCharge at 212-247-7800 or by visiting the Carnegie Hall website, carnegiehall.org.