Carmen McRae for Cool Ones 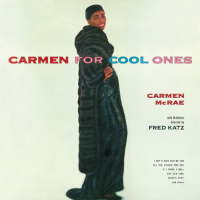 slideshow
Between 1954 and 1958, singer Carmen McRae recorded 12 albums for Decca. She was signed by Milt Gabler, Decca's head of A&R, after he had seen her sing at a Brooklyn club. Gabler had great success producing Billie Holiday between 1944 and 1950 for Decca and Ella Fitzgerald between 1942 and 1955. When Fitzgerald announced in '54 that she would be leaving to join Verve the following year, Decca needed a replacement in a hurry. Not only did the label need to fill Fitzgerald's market niche with a soulful jazz-pop singer, but also the 12-inch LP was rolling out, compelling Decca to sign an endurance artist who could easily handle the demands of recording on the longer format.

One of McRae's last albums for the Decca was among her most fascinating. Carmen for Cool Ones, recorded in December 1957, featured arrangements by jazz cellist Fred Katz. The musicians on the first session—You're Mine, I Remember Clifford, A Shoulder to Cry On and Weak for the Man—included Buddy Collette (fl,as), Warren Webb (oboe), Justin Gordon (b-cl), George Smith (cl), Joe Marino (p), Joseph Gibbons (g), Ike Isaacs (b), Specs Wright (d) and 13 strings, with Katz conducting.

The second session—All the Things You Are, After I Say I'm Sorry and If I Were a Bell—featured Bill Green and Harry Klee (fl), George Smith (cl), Mahlon Clark and Justin Gordon (b-cl), Ike Isaacs (b), Specs Wright (d) and Fred Katz conducting.

What makes this album special is the effortless juxtaposition between McRae's late-night vocal style and sterling articulation and Katz's moody and helter-skelter modern classical approach to string and ensemble writing. This must have been a highly difficult album to record for McRae and Katz (above) to record, since Katz's busy arrangements would have been a distraction for nearly any other singer and Katz's charts are challenging to say the lease. To McRae's credit, she smartly blocked out the orchestration, delivering flawless vocals as if singing with a trio.

This compartmentalized approach and McRae's execution left Katz's musicians free to do its jazz-classical thing, without having to worry about delivering a steady beat. It's as if McRae is singing a duet with a band that at times appears to be singing its own tune. The secret to the album's success is McRae's forceful attack, powerful tone and straight-up renditions. Think Miles Davis and Gil Evans. There's a splendid clashing of styles here, and like Davis and Evans, McRae and Katz pull it off with fascinating results. McRae's voice soothes the heart while Katz's arrangements hold the ear, providing two albums in one.

JazzWax tracks: You'll find Carmen for Cool Ones a two-fer combined with her Mad About the Man, her previous album.