Carlos Valdes, a Conga King of Jazz, Dies at 81 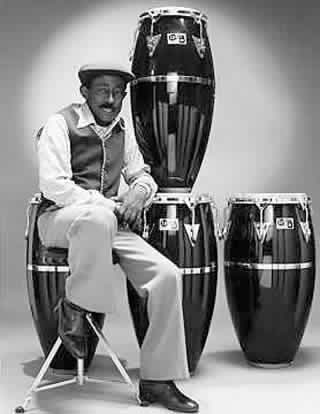 slideshow
Carlos Valdes, better known as Patato, whose melodic conga playing made him a giant of Latin jazz in Cuba and then for more than half a century in America, died on Tuesday in Cleveland. He was 81 and lived in Manhattan.

The cause was respiratory failure, said his manager, Charles Carlini.

Born in Havana, Patato (a reference from Cuban slang to his diminutive size) played in the 1940s and early '50s with important groups like Sonora Matancera and Conjunto Casino. He became a star in the early days of Cuban television for his virtuosic playing and for his showmanship; his signature song was “El Baile del Pingino" ("The Penguin Dance"), which he illustrated with side-to-side, penguinlike movement in perfect time.

He came to the United States in the early 1950s and settled in New York, where he quickly established himself as an indispensable player, performing and recording with some of the top names in jazz and Latin music. In the '50s and '60s he worked with Dizzy Gillespie, Tito Puente, Machito, Kenny Dorham, Art Blakey and Elvin Jones; he played with Herbie Mann from 1959 to 1972.

Known for his fluid, improvisatory melodies, Mr. Valds tuned his drums tightly to produce clear, precise tones, and he popularized the playing of multiple conga drums; when he began his career, conga players, or congueros, typically used only one or two drums, but Mr. Valds played three, four or more to allow a wider range of tones.