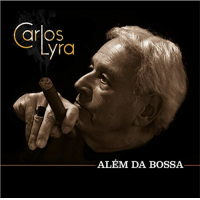 In the late 1950s, Rio de Janeiro experienced enormous optimism. North American trade was on the rise, and the advent of jet travel between Brazil, France and the U.S. boosted tourism. Business at the city's hotels, lounges and restaurants soared. Throughout Rio, a new form of music was stirring. It was more jazz-romantic and folk-centric than the whistle-infused samba. It also was intimate and expressive, and celebrated the sensuality and cool of the young beach crowd. When João Gilberto released his seminal first album, Chega de Saudade, in 1959, the new music floating around the city crystallized as the bossa nova.

Gilberto wasn't a major composer but he was a master interpreter of the new music. His soft, hushed voice and rhythmic guitar were intoxicating. Of the 12 songs on his first album, two composers stood out—Antonio Carlos Jobim and Carlos Lyra. Three songs were by Jobim and lyricist Vinicius De Moraes, and three were by Carlos and lyricist Ronaldo Bôscoli. When I interviewed Carlos in 2015, he told me that the term “bossa nova" was born at the Hebraic Club in the Flamengo district of Rio in 1957, where lyricist Ronaldo Bôscoli, guitarist Roberto Menescal, singer Sylvia Telles and Carlos performed. “At this place," he said, “the event manager of the club announced us as a bossa nova group. He used a slang that was not very common and we accepted this title. At the same time our group was getting together, other groups were also doing the same thing. We became aware of each other at gatherings on the beach at night. There was no one single place where the bossa nova happened."

In effect, the bossa nova was beach music, the same way that West Coast jazz was born on the beaches of Hermosa, Newport and Redondo in California. The bossa nova was the sound of the surf, sun, beauty and love. The emphasis was on catchy melodies and gorgeous harmony with a breezy acoustic guitar. And like all beach music, it was transportive and easily exportable. If you heard the music in Europe or the U.S., you thought of warm weather, relaxation and romance. It couldn't be helped.

The beauty of Carlos rests in his voice. It's warm and woody, and masculine sexy. Also lush are the lyrical twists and turns of his melodies and the harmony of his voice, not to mention his guitar playing. Music this beautiful and honest is a treasure. In the old days, the album would have remained in Brazil waiting for an American label to distribute it in the U.S. Which means you wouldn't likely have heard it. Now, thanks to Spotify and global distribution, the album is readily available to whisk you away to the sand of Ipanema Beach. Bravo Carlos!