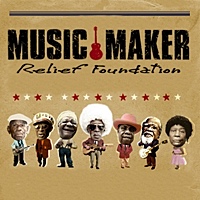 slideshow
Capitol Blues Night returns Thursday March 12 2015 at Clydes of Gallery Place in Washington D.C.! It’s not often you get to see Ironing Board Sam, Cool John Ferguson, Sol Roots, all on one ticket! This fantastic show will only have 100 tickets available, so get yours now!

Music Maker Relief Foundation founder Tim Duffy said, “This is a classic drink-house lineup performing in downtown Washington DC. Ironing Board Sam filled the Blues Tent to capacity at Jazzfest all by himself. Add Cool John Ferguson and Sol, and the show will be just that much more explosive.”

The Music Maker Blues Revue highlights electric blues, boogie-woogie, R&B and soul music with the performances by Music Maker Relief Foundation partner artists. Music Maker works with these artists to elevate their careers and present them to the world, while preserving Southern musical traditions for future generations.

About the performing artists

Cool John Ferguson, of Beaufort, S.C., began playing the guitar at 3 years old and has been called by blues legend Taj Mahal “…among the five greatest guitarists in the world. He is with the ranks of Jimi Hendrix, Wes Montgomery, and Django Reinhart”

Ironing Board Sam, a singer, songwriter and pianist, was a house musician on the first televised African-American music revue called “Night Train” and then became one of the best-loved entertainers on the Crescent City’s music scene, before relocating to N.C. and working with Music Maker.

Sol Roots creates a blend of energetic rock, raw blues, jazz, and funk, all delivered with deep soul. Sol has also performed with a range of Blues Legends from Guitar Gabriel to Taj Mahal.

Tickets are $100 and include beer, wine and hors d'oeuvres - as well as a great night of Blues performances!

The Music Maker Relief Foundation, a 501c3 non-profit, was founded to preserve the musical traditions of the South by directly supporting the musicians who make it, ensuring their voices will not be silenced by poverty and time. Music Maker will give future generations access to their heritage through documentation and performance programs that build knowledge and appreciation of America’s musical traditions.

Since our founding in 1994, we have assisted and partnered with over 300 artists, issued over 150 CDs and reached over a million people with live performance in over 40 states and 17 countries around the globe.

About Ironing Board Sam