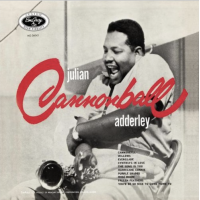 slideshow
Born in Tampa, Fla., and raised in Tallahassee, alto saxophonist Cannonball Adderley studied music at Florida A&M before becoming the band director at Dillard High School in Fort Lauderdale. In 1955, Adderley moved to New York to explore studying at graduate-level music schools. He was joined by his brother, trumpeter and cornetist Nat Adderley, who had been on tour with Lionel Hampton. As the story goes, the Adderley brothers brought their instruments to the Café Bohemia at 15 Barrow Street in Greenwich Village. That night, Cannonball was asked by bassist Oscar Pettiford to sit in and fill the spot of Pettiford's regular alto saxophonist, who was late.

Adderley's first recording as a sideman came in June, on Kenny Clarke's Bohemia After Dark. His reputation grew so fast that a month later Savoy hired him to record as a leader. A week after Cannonball's Savoy session, Bob Shad at EmArcy, a Mercury jazz subsidiary, signed Cannonball to record a series of releases for the label as a leader and sideman. His first for the label recorded in July and August was an album simply entitled, Julian Cannonball Adderley.

Adderley's lightning-fast rise had much to do with Charlie Parker's death months earlier in March 1955 and his natural gift for playing and leading. Parker's passing left a hole in the jazz world for a superstar alto saxophonist, and Adderley was more than prepared to fill that role. There was blues in his tone, he was fast and he knew his music. But most of all, he was highly disciplined.

Quincy Jones (above) played a major role in the album's sound. He arranged all the songs for the Adderley octet, composing three of them (Willow, Hurricane Connie and Fallen Feathers, which is a twist on Charlie Parker's ballad Parker's Mood), and co-wrote Everglade with Adderley. The rest of the songs were by Adderley.

This is a sterling album that over the years has been largely forgotten. Adderley sounds superb, with his lush vibrato, golden tone and fluid technique. He could play joy and melancholy with equal conviction, and in that regard he was Parker's heir on the instrument. Yesterday, I listened to the album 10 times in a row and never tired of Quincy Jones's touch and Adderley's lyrical runs. The octet is dynamic and smartly combined. The album is perfect in every way and a must own.