With a powerful voice and soul in spades, Debora Galan is a true talent. —The San Diego Troubadour 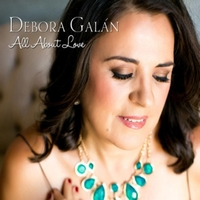 slideshow
With her album, All About Love, composer and vocalist Debora Galán shares original jazz and pop compositions inspired by her Spanish and Cuban ancestry and her abiding love of melody, rhythm and groove. Aided by Emmy winning and GRAMMY nominated producer and multi-instrumentalist Allan Phillips, she shares a compendium of smooth and tasteful Latin- flavored jazz tunes with lyrics in English and Spanish.

A large team of notable California instrumentalists and singers give life to the recording. The album single, “Arms of Love” and the corresponding music video are already attracting attention from fans and receiving airplay in the U.S. and abroad, where English radio seems particularly appreciative. The quality of the recording led Jazz Beyond Borders to add the performer to its roster of international recording and performing artists.

Born in Brussels and raised in Madrid, the bilingual songstress inherited her love of music from her grandfather and mother, who both sang flamenco. She moved to the States near the end of primary school and began singing professionally in her teens. By the 1980s, Galan was living in Washington, D.C., performing with leading bands in Latin jazz and salsa clubs, and opening for major Latin stars.

Now at home in San Diego, the stunning vocalist performs widely up and down the West Coast, with occasional forays to Las Vegas. Having mastered R & B, Gospel, Jazz and Latin styles, she lends her talent to numerous collaborations. She has recorded with singer songwriter Steven Ybarra and pianist Greg Manning and collaborated with Greek guitarist Vassilis Sotiriou among others. (Stay tuned for news of an upcoming venture with Christian de Mesones.) In her first album as a leader, she infuses her appealing brand of world music with passion and optimism.

All About Love reveals the strong song-writing ability of a singer better known for belting out American jazz and rhythm and blues. Full of fire and a high level of rhythmic and melodic content rarely heard these days, the disc features nine tracks in English and two in Spanish. Reviewers are beginning to weigh in. Jazz Quarterly praised her “passion, style, charm and equally energetic and delicate tones.” The San Diego Troubadour says, “With a powerful voice and soul in spades, Debora Galan is a true talent.” Heartened by the response to date, Galan is poised to embrace a worldwide audience.

Noteworthy tracks include Galan’s composition “Arms of Love” on Track 2. A contemporary jazz piece with sophisticated Latin elements, it also appeals to adult contemporary listeners. Vocals are warm and intimate, carrying the song from simple beginning to powerful conclusion.

Penned by Galan and Phillips, “Luz Del Sol” on Track 5 is similar in genre but sung in Spanish, adding a touch of fire to Galan’s vocals. Nathan Brown’s bass is intriguing and hypnotic. Superbly orchestrated horns enhance the dynamics and reinforce the uplifting chorus of this salsa, pop and funk hybrid.

“Love Sublime” on Track 6 is an arrestingly beautiful ballad with an engaging melody in which the singer/songwriter shares her very own love story. Galan’s tender, angelic vocals have driven several critics to wax poetic about her vocal ability. Subtle bass and soft tropical percussion fuse beautifully with touches of classical guitar.

Sample and purchase album tracks from your choice of vendors on deboragalan.com. Read Debora Galan’s popular “Take Five" interview on All About Jazz. For booking and touring information visit Jazz Beyond Borders.