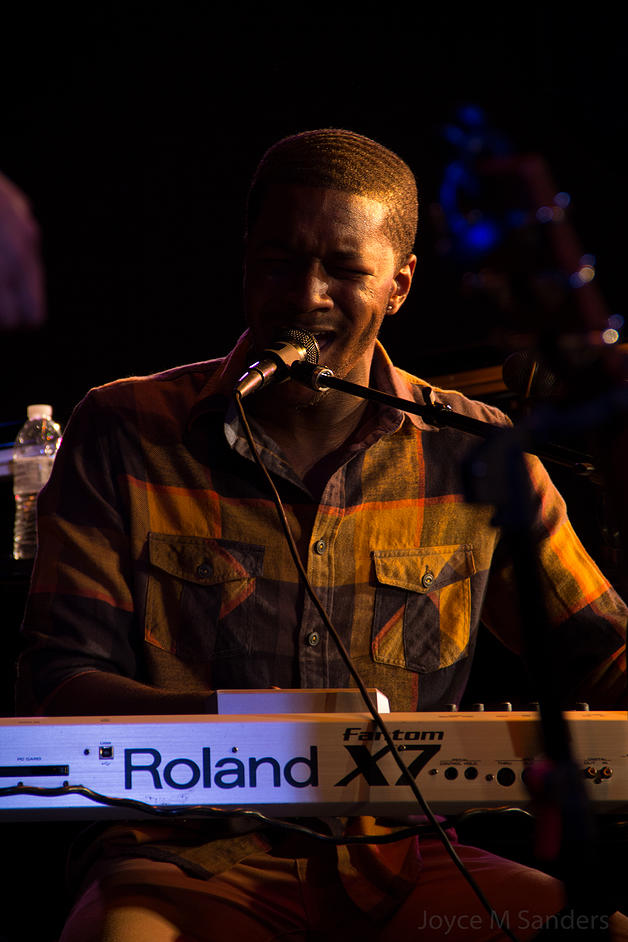 Caleb Sean McCampbell is usually accompanying other musicians around Dallas, but he headlined his own group —the Caleb Sean Trio—at the Balcony Club on March 13th. It was a spirited event with McCampbell on keyboards, Taron Lockett on drums and Jay Mack on bass.

Great variety of music: they played some standards, some classics and some contemporary hits. McCampbell, a graduate of a famous music school in Dallas (Booker T. Washington High School for the Visual and Performing Arts), took this opportunity to tell stories about and perform one of the songs about one of the school's famous graduates, Norah Jones.

Over all, it was a swinging night of music with party-goers from the East Dallas community and other musicians dropping in. McCampbell plays in the Funky Knuckles which has released a couple albums to great acclaim.

He is in demand most nights of the week accompanying other groups on the keyboard. He puts in work as a side-man on recording sessions and even produces other artists, most famously a song for pop star Beyonce.

Taron Lockett was able to show the breadth of his skills on drums by minimalizing his playing on the slower, jazzier numbers and then opening up and tearing up the drums on his solos. Lockett is known around Dallas as the percussionist for the group R.C. and the Gritz, a band in itself but also the backing band of Erykah Badu. Lockett was seen on TV recently playing drums for Liv Warfield.

Jay Mack was laying down the grooves on bass. Jay Mack can be seen all over the Dallas area playing at Buttons, Club Memphis, Brickhouse and more.

The Caleb Sean Trio was well-received at the Balcony Club. The crowd called out for an encore and seemed excited about a possible return in the near future.