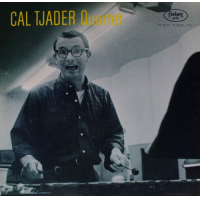 slideshow
Over the years, many jazz fans have assumed Cal Tjader was of Hispanic heritage, given his many Latin albums from the early 1950s onward. Actually, he was the child of Swedish-American vaudeville performers. His parents were a husband-and-wife team—his father tap danced while his mother played piano. They appeared at theaters in the region around their home in St. Louis before resettling in San Mateo, Calif., to open a dance studio. As a young boy, Tjader developed into an exceptional tap dancer, a skill that greatly helped his timing and vibraphone playing. Tjader also could play the piano and drums. Remarkably, lessons on the timpani were his only formal music training.

Tjader's first recording session as a sideman was on Charles Mingus's Presents His Symphonic Airs in February 1949, when the bassist was still on the West Coast and known as Baron Mingus. In September of '49, Tjader began recording as a member of the Dave Brubeck Trio with Ron Crotty on bass. They toured and recorded together for a year before Tjader led and recorded with his own trio in 1951 and then joined the George Shearing Quintet in 1953. The Shearing group recorded for MGM in the spring and late summer of '53.

Then came Cal Tjader's second 10-inch album, Vibraphonist. It was a quartet date recorded in New York for Savoy Records over two sessions months apart. Side 1 was recorded on October 21, 1953 and featured Cal Tjader (vib), Hank Jones (p), Al McKibbon (b) and Kenny Clarke (d). The four songs were Gigi Gryce's Minority and the standards I Want to Be Happy, Love Me or Leave Me and Tangerine. Gryce must have played the Minority for Tjader at some point, since the very first recording of his song was in Paris on October 8, a few weeks before Tjader's.

Side 2 was recorded on March 2, 1954 and included Cal Tjader (vib), Richard Wyands (p), Al McKibbon (b) and Roy Haynes (d). The four songs were A Sunday Kind of Love, After You've Gone, It's You Or No One and Isn't It Romantic.

What's interesting about Tjader on these tracks is his modernity. Many other vibists of the early 1950s such as Lionel Hampton and Red Norvo still had a swing feel. A few had a sound that was years ahead, such as Teddy Charles, Milt Jackson, Terry Gibbs and Marjie Hyams. But there was an extra coolness to Tjader, a dancer's movement and keyboard approach on songs as straight ahead as I Want to Be Happy and It's You Or No One.

In the years ahead, Tjader would push heavily into Latin, which meant Cuban, Mexican and Brazilian music, mostly. I suppose it was his way of diversifying his repertoire and maximizing his earning potential. He didn't venture far without a conga and bongos. But in the beginning of the album era, when LPs were still 10 inches and held only eight tracks, Tjader played jazz the way Gene Kelly danced. Tjader's pure jazz sound would be short-lived.