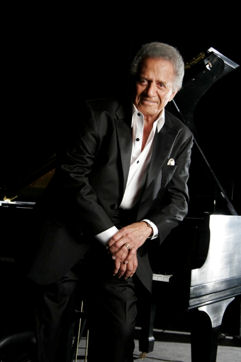 Born in Philadelphia, Greco had his work cut out for him. His father was one of the country's leading opera critics and his mother was an accomplished accordionist. Greco made his professional debut at 5 on Philadelphia's WPEN, where he spent the next 10 years as an actor, singer and pianist. Following two years with Benny Goodman starting in 1948, he was hired in 1950 by NBC-TV as the male vocalist on Broadway Open House. The show lasted a year but launched the careers of many famous pop singers.

Able to sing from the piano effortlessly, Greco formed a trio and began working popular lounges throughout the country. The difference between Greco and most of his cocktail-hour peers such as Matt Dennis and Page Cavanaugh, is that he was younger, urban and more comfortable in front of the TV camera.

Greco's piano playing was especially confident and right on time. He was only in his early 20s when he played with Goodman, which says a great deal about his talent and self-assuredness. Of course, Goodman did wind up with two talents for the price of one, since Greco played piano and sang with the orchestra.

In the LP era, Greco had a smooth, middle-of-the road voice that could include annoying hipster shtick that seemed to charm Las Vegas and Palm Springs lounge audiences. Greco also tended to junk up up-tempo songs by neurotically adding an “ah" to the end of virtually every lyric line. For example, words like “Malibu" became “Malibu-ah" and “drinking wine" became “drinking wine-ah."

Depending on the song, his baritone voice seemed to carry traces of Jackie Paris, Sammy Davis Jr., Matt Dennis and Nat King Cole (Greco liked to drop down to a note instead of up). Eventually, his freewheeling swinger approach was leveraged effectively by Bobby Darin.

But what Greco lacked in honest emotion he made up for with a silky delivery on ballads. On slow numbers such as The More I See You or Blame It on My Youth, he scrapped the scotch-and-soda affectations and focus solely on delivery and phrasing. It was on songs like those when Greco became a singer worth listening to.

As for his piano, it's important to note that in 1966, Greco was at the keyboards in Buddy Rich's powerhouse band. The pair also starred together in a 1967 summer replacement TV series called Away We Go along with comedian George Carlin.

JazzWax tracks: Among Buddy Greco's rock solid vocal albums are My Buddy (1960), Big Band and Ballads (1966) and, my favorite, Songs for Swinging Losers (1961), arranged by Chuck Sagle in the style of Nelson Riddle.

JazzWax clips: Here's Buddy Greco in 1963 on the Ed Sullivan Show playing Fly Me to the Moon. A superb pianist...

Here's Buddy Geco singing The More I See You...

Here's Buddy Greco singing Blame It on My Youth from Songs for Swinging Losers...

And here's Buddy Greco at the piano in 1966 with the Buddy Rich band playing Rotten Kid...