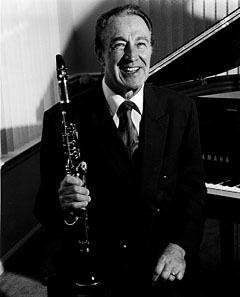 slideshow
Buddy DeFranco, the innovative clarinetist who rose from the remains of the swing era to forge new and lasting prominence as the instrument’s pre-eminent interpreter of bebop, died on Wednesday in Panama City, Fla. He was 91.

His death was confirmed by his wife, Joyce.

From 1939, the year he graduated from a high school music program in Philadelphia, until just a few years ago, Mr. DeFranco was rarely off a stage, large or small.

After a decade of roadwork with big-name dance bands, Mr. DeFranco — tall, handsome and not yet 30 — was poised to inherit the throne shared for years by Benny Goodman, the King of Swing, and Artie Shaw, the King of the Clarinet. But by the time that moment arrived, the big-band clarinet realm had diminished significantly, overtaken by the saxophone and modern jazz.

Captivated by the complex, challenging new sounds and increasingly aware that the music market was evolving, Mr. DeFranco moved quickly to carve out a fresh career in bebop, a perilous undertaking on an instrument that requires nearly superhuman skill and dexterity to keep up with bebop’s sometimes freakishly fast tempos.

“Buddy is unique because he was really the only clarinetist who caught on to the new jazz language,” Dan Morgenstern, the jazz critic and historian, said in an interview in 2012. Unlike Goodman, Mr. Morgenstern said, “he had an ear to deal harmonically with modern jazz” — and unlike Shaw, who ultimately gave up playing, he was more consistent and more disciplined.

Over a 70-year career, Mr. DeFranco became a perennial fan favorite, winning Down Beat magazine’s annual popularity poll 20 times and drawing fresh audiences with his warm tone and effortless technique. In a business known for the volatility — even mortal dissipation — of its stars, Mr. DeFranco was noted, and occasionally needled, for his relentless daily practice regimen. On the bandstand he was focused yet easygoing, preferring to showcase fluid playing over instrument-waving histrionics.

His first big job was playing alto saxophone and clarinet with the band led by the trumpeter Johnny (Scat) Davis, followed by stints with Gene Krupa, Charlie Barnet and Tommy Dorsey. From the late 1940s on, he became known for his more intimate collaborations with other greats, among them the pianists George Shearing, Count Basie, Art Tatum and Oscar Peterson and the drummer Art Blakey.