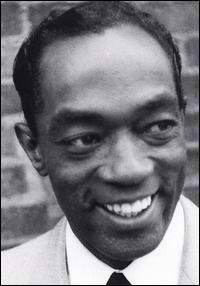 slideshow
Back in the early 1950s, R&B was still largely unknown by white radio listeners and record buyers. Marketed to adults in Black urban neighborhoods on jukeboxes in corner bars and clubs, R&B's dance beat picked up where swing left off and modern jazz began. Swing dancing faded after World War II as marriage rates climbed. Many swing bands also cut back on touring in the late '40s due to fewer clubs thanks to higher taxes on venues that allowed dancing.

Meanwhile, modern jazz attracted listeners in urban markets, but the music was meant to be heard while seated. As for the white mainstream market that grew up dancing to swing bands, they moved on to gentler pop vocals and bands. That left a vacuum for music with dance tempos. Jump blues filled the void in the late 1940s and stars emerged, including Lionel Hampton, Louis Jordan, Johnny Otis and others. Then came R&B in 1949, a blues with a strong backbeat and an emphasis on vocals.

Originally from Darlington, S.C., Buddy Johnson moved to New York at age 23 with aspirations to study classical piano but soon found that work was most plentiful in the city's lounges and clubs in Black neighborhoods. In the late 1930s, he toured Europe but was forced to return to the U.S. as World War II neared. Back in New York, he was signed by Decca and began recording in 1939.

His sister Ella (above) joined him in the early 1940s and the pair became hugely popular at the Savoy Ballroom. In 1944, Johnson added a young Arthur Prysock to his group of vocalists. Late in the decade, the band toured extensively along the so-called Chitlin' Circuit of clubs in the South. In 1950, he told an interviewer in New York, “The type of music that we're playing is not what I'd call music. Personally, I like classics, but I can't eat classics. We're very well aware of what we're playing. But we've set our style now and we can't change it to please New York because our bread and butter is in the South."

By the early '50s when the speed battle between the 33 1/3 and 45 formats settled out, 33 1/3 was used for albums and 45s for singles. The rise of affordable portable phonographs and independent radio stations placed an emphasis on hits. Hit records ushered in more stations and fast-talking DJs, who in turn caught the ear of white teenage listeners turning their radio dials late at night.

In 1953, the Buddy Johnson Band began recording for Mercury and racked up R&B dance hits throughout the decade. The band was tight and muscular on a wide range of up-tempo swing blues songs and ballads. Buddy Johnson's most successful composition was Since I Don't Have You, which he wrote in 1945 for his sister Ella but became a massive crossover his in 1963 by Lenny Welch. By 1964, Buddy and Ella Johnson's popularity began to fade with the rise of Motown, Stax and other new labels with a more sophisticated soul-pop sound.

JazzWax clips: Buddy and Ella Johnson are towering figures in R&B. They personified the energetic New York sound and were a virtual hit machine during the 1950s. Here are 10 of their singles, but virtually everything they recorded had the same spunk and soul. If your feet ain't movin, your heart ain't beatin':

Here's That's How I Feel About You...

Here's Since I Fell for You...