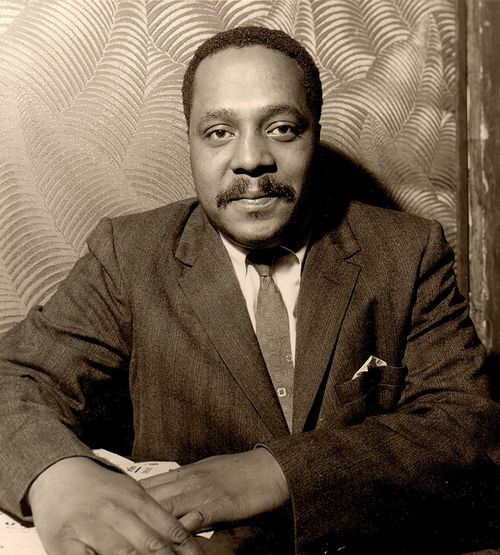 slideshow
On May 2, 1945, pianist Bud Powell was in a New York studio recording with tenor saxophonist Frankie Socolow. Four months earlier, Powell had endured a beating by the police in Philadelphia while on tour with the Cootie Williams Orchestra. After playing a dance in January, Powell had been found drunk in a train station by Philadelphia railroad police, who subdued him after struggling to arrest him for disorderly conduct. The next day, Powell was released by the police into the custody of his mother, who took him home to New York to mend. But Powell had trouble recuperating. According to Powell biographer Guthrie P. Ramsey, the pianist entered Pilgrim State Hospital on Long Island in February for 10 weeks of psychiatric care.

Soon after his release, Powell joined Socolow (above), Freddie Webster (tp), Leonard Gaskin (b) and Irv Kluger (d) to record four sides for the Duke label. At the time, Socolow was a swing saxophonist whose seamless, breathy glides were greatly influenced by Ben Webster. By contrast, Freddie Webster—a patient, punctuating player who would become a major influence on Miles Davis before dying of a heart attack in 1947—already exhibited bebop chops. [Photo above of Frank Socolow in 1947 by William P. Gottlieb]

Of the four sides recorded that day—The Man I Love, Reverse the Changes, Blue Fantasy and September in the Rain—the first two were issued as flip sides of the same single while Blue Fantasy was unissued and September in the Rain was released with its flip side blank. September in the Rain is the most interesting side from the session. Webster's early bop lines come just three months after Dizzy Gillespie and Charlie Parker's Groovin' High session for Guild. Powell's solo shows inklings of his emerging bop style, though he hangs closer to stride here. On Powell's next recording session in January 1946, led by tenor saxophonist Dexter Gordon, he offers a more robust bop approach while his recordings with trombonist J.J. Johnson that June would feature a more fully formed bop piano style. The bop learning curve in New York over that 12-month period between mid-'45 and '46 was like a pressure-cooker, with the jazz style gelling and approaches hardening. These three recording sessions alone are evidence of the rapid and fascinating evolution. [Pictured above: Freddie Webster on trumpet]

Dig the progression of recordings that led to Powell's definitive bop style:

Here's September in the Rain with Frank Socolow and Freddie Webster from May 1945...

September in the Rain

Here's Dexter Digs In with Dexter Gordon from January 1946...