SOURCE: ALL ABOUT JAZZ PUBLICITY
December 9, 2017
Sign in to view read count 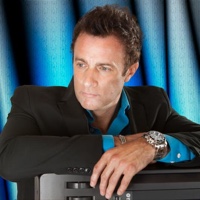 slideshow
Bucks County’s Pennsylvania’s own, pianist and composer Eric Mintel has just landed the opportunity of a lifetime and a personal mission he has led for the past 25 years as bandleader of the Eric Mintel Quartet. In January Mintel will host his own TV show called Talking Jazz with Eric Mintel.

The show will be taped out of TV30 in Princeton, NJ and will feature jazz musicians but will also focus on people behind the scenes, organizations, non profit groups and unsung heroes who are helping to bring jazz more into the public mindset. The show of course will feature jazz musicians covering the entire spectrum of the music, from emerging talents to elder statesmen. “It's been my mission with the Eric Mintel Quartet over the last 25 years of bring more jazz to the masses. I love jazz because it’s such a positive art form and every time we play it people come up to us after our concerts from all different cultures with huge smiles on their faces, telling us that they have a new understanding for jazz”, Mintel said from his home in Morrisville, PA.

Each episode of Talking Jazz with Eric Mintel will appear on television and aired on Mintel Facebook page as well as on You Tube, Vimeo and other streaming channels. Mintel has already received sponsorship for his niche program. Upcoming guests include pianists Jim Ridl, Steve Rudolph and George Hazelrigg as well as guitarist Vic Juris as well as All About Jazz Founder Michael Ricci, plus many others.

Pianist and composer Eric Mintel leads his jazz quartet consisting of Nelson Hill saxophone/flute, Dave Mohn drums and Jack Hegyi bass and has performed twice by invitation at the White House for President Bill Clinton (1998) and President Barack Obama (2011) where the Commander in Chief said, “Your music set the mood and the tone for the entire evening! Thank you for your artisty.” The EMQ has also opened for Dave Brubeck at the Kimmel Center in Philadelphia, has performed several times at the John F. Kennedy Performing Arts Center in Washington DC and recently had a special concert at the United Nations in New York City. In 2005 Mintel was also a featured guest on Marian McPartland’s Piano Jazz on NPR which also aired again in January 2016 and the quartet’s music is frequently heard on Sirius and XM radio.

The Eric Mintel Quartet are also educators and conduct clinics and workshops at Colleges, Universities on how to listen to jazz, the roles of the instruments in a jazz combo, improvisation and the business of jazz: how to get a gig.