SOURCE: ALL ABOUT JAZZ PUBLICITY
July 31, 2007
Sign in to view read count 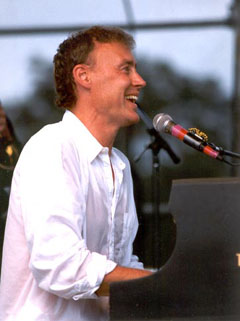 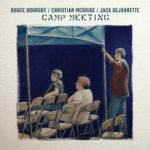 Bruce Hornsby, Christian McBride and Jack DeJohnette will take their show on the road in select cities in August, including Northampton (Mass.), the Newport Jazz Festival, Los Angeles and San Francisco.

Bruce Hornsby's Camp Meeting -- a potent and spirited collection of instrumental performances steeped in improvisation with the pianist in the company of two of jazz's most esteemed musicians, bassist Christian McBride and drummer Jack DeJohnette - is set to arrive in stores August 7th on Legacy Recordings, a division of SONY BMG MUSIC ENTERTAINMENT. In addition to originals composed by Hornsby, the trio delivers new versions of compositions by John Coltrane, Miles Davis, Thelonious Monk and Bud Powell. Plus, Hornsby and company debut a previously unrecorded Ornette Coleman work titled “Questions and Answers" and render an early Keith Jarrett composition from the '70s, “Death and a Flower."

“I've spent my entire life combating closed-mindedness in music as well as the lack of an adventurous spirit," says Hornsby, a musical omnivore who cites a variety of influences from Samuel Barber and Charles Ives to jazz pianists Keith Jarrett and Bud Powell. “Just like all my music, this jazz album is coming from a natural place in me."

Hornsby calls his distinctive style a meld of jazz pianist “Bill Evans-meets-the hymnbook. I've always loved Bill's harmonic conception that comes out of Ravel and the French Impressionists, and I've been influenced by folk hymnal harmonies and voice movement. A lot of my friends associate jazz with cocktail music, but I've always sought to have my own sound and bring my own harmonic aesthetic to the music."

Fans familiar with Hornsby's career know that it was only a matter of time before he would record a fully jazz album. He attended school at both Berklee College of Music in Boston and at the University of Miami, where he earned a bachelors degree in music. From his earliest pop hits like “The Way It Is" and “The Valley Road," he demonstrated a penchant for extended jazz-like piano solos. And throughout his storied career, Hornsby has engaged in rich collaborations with such jazz stars as guitarist Pat Metheny and saxophonists Branford Marsalis and Ornette Coleman, as well as filled the piano chair in rock's greatest improv group, the Grateful Dead, in the early '90s.

After many years of contemplating a jazz album, the seed for Camp Meeting was planted five years ago when Pat Metheny invited Hornsby to join him on the Miles Davis composition “Solar" at a gig where the guitarist was performing with the University of Virginia jazz orchestra band. “I played a piano intro and afterward Pat said that I should make a jazz record," says Hornsby. “He felt I had developed my own way of playing the jazz repertoire. I wasn't ready to make the record at that time. Playing jazz is a lifetime study, and I knew that I had to do some serious shedding before I could undertake this project."

Fast forward to the summer of 2005 when Hornsby caught one of his heroes, Keith Jarrett, performing with his longtime trio of bassist Gary Peacock and drummer Jack DeJohnette, at Carnegie Hall. “Jack asked me backstage, 'When are we going to do something?', at which point I told him that I had no excuse but fear," Hornsby says laughingly. “Jack told me that when I got over that to give him a call."

By November, after finding free time in all their busy schedules, both DeJohnette and McBride were on board, and in April 2006, the three settled into Hornsby's Virginia studio, rehearsed and then recorded Camp Meeting.

Hornsby admits that it was a daunting experience playing with such top-drawer jazz artists: “It was stressful. In many ways I was out of my element playing with these titans of jazz, but in the end I believe they felt we had recorded something fresh and we all had fun. Jack and Christian both had a ball 'blindfold testing' people and asking them to guess who the pianist is."

Hornsby adds, “I've come up with a standard line about how Camp Meeting came to be: Imagine that you took six years of French and became fluent in the language, then didn't speak it for 30 years. Then you're hired to be the French translator at the U.N. Imagine how hard and intimidating that would be. That's how it was with me playing jazz. And that's why I spent a lot of time in the woodshed, and still do. It's a never-ending pursuit."