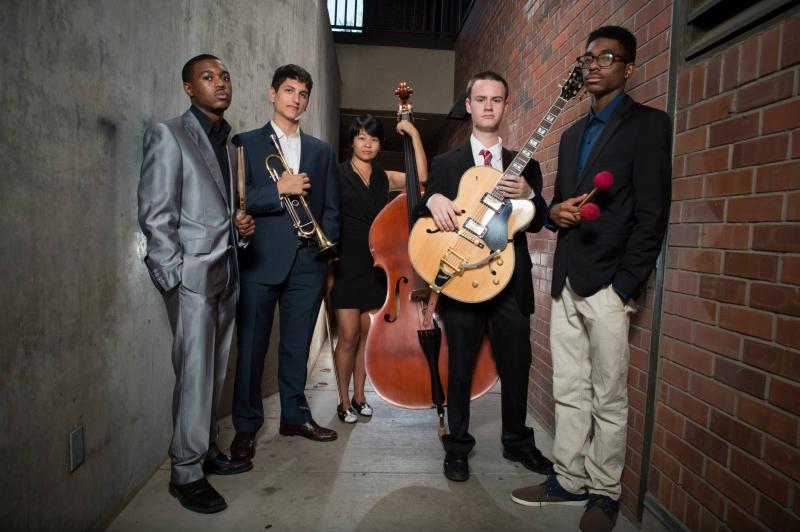 There is everything hip about a pair of horned-rimmed glasses.

University of the Pacific alumnus and jazz great Dave Brubeck ’42, namesake to the Brubeck Institute, made that clear throughout his storied career.

Brubeck’s long and rich musical association with the hugely influential Monterey Jazz Festival continues this weekend with a discussion of that very hipness. It will be the core topic when a panel considers “Dave Brubeck: Hip as a Pair of Horn-Rimmed Glasses” at 2-3:30 p.m. Saturday, Sept. 21, at the Dizzy’s Den venue of the 56th Monterey Jazz Festival.

His “enduring music and celebrated career” will be discussed by a panel that includes his sons, Chris and Dan, bassist Eugene Wright, and longtime manager Russell Gloyd, and will be moderated by jazz author Ashley Kahn.

The Brubeck legacy continues a short time later when the Brubeck Institute Jazz Quintet performs 4-5 p.m. Saturday at the festival’s Night Club venue. The Brubeck Brothers Quartet takes the same stage 10:30-11:30 p.m. Saturday. The group is made up of Dave and Iola Brubeck’s sons, Chris and Dan, and Mike DeMicco and Chuck Lamb.

“There is absolutely no doubt that Dave Brubeck enjoyed performing at the Monterey Jazz Festival and that there is a very real connection between Dave and the festival that continues to this day,” said Simon Rowe, executive director of the Brubeck Institute at University of the Pacific. “The panel discussion should be fantastic, and following that with Brubeck Fellows performing and the Brubeck Brothers Quartet performing later in the evening should be wonderful, as well.”

The jazz great’s connection to the festival dates back to the very beginning.

Other tributes to Brubeck, his music, and his passionate support of social justice and use of music for international diplomacy are going on throughout the weekend festival, the first since the jazz great’s death on Dec. 5. A tribute is planned by the Clayton-Hamilton Jazz Orchestra at 9:20-10:20 p.m. Friday, Sept. 20, in the Jimmy Lyons venue at the festival, said Rowe. Jazz festivals throughout the country have been paying tribute to Brubeck and his music since his death, with the most recent accolades coming at the 34th annual Detroit Jazz Festival that took place Aug. 30-Sept. 2.

Brubeck led the first integrated military jazz band while serving in the Third Army under Gen. George Patton. In 1958, the same year he helped convince Monterey city officials to allow the first Monterey Jazz Festival, he canceled 20 concerts scheduled in southern states rather than accept demands that he have only white musicians play with him on stage.

“That was always very important to Dave – social justice and using music to break down barriers and obstacles that normal means of diplomacy could not knock down,” said Rowe.

Festival audiences this weekend will get a chance to see the all-new Brubeck Institute Jazz Quintet. The new members include the group’s first-ever female Fellow and this is the first year that the group has had no pianist.

While it is not the first time the award-winning and much-traveled group has performed at the Monterey Jazz Festival, it will be the first time this particular group of Brubeck Fellows will climb the stage to entertain jazz-savvy audiences.

“This group of Brubeck Fellows has come together to meet head-on the rigorous musical instruction and demanding performance schedule,” said Rowe. “That’s part of being a Brubeck Fellow. Another part is sharing the opportunity to perform before audiences such as those at the Monterey Jazz Festival, where Dave Brubeck had such a musical influence. This is a wonderful opportunity for them to shine.”

Coming up for Brubeck Institute

There are several upcoming events of interest for the Brubeck Institute at University of the Pacific:

The Brubeck Institute Jazz Quintet will tour Washington, D.C., Oct. 7-10 and perform at the Library of Congress – where in October 2003 Dave Brubeck was named a “Living Legend” – and the Russian Embassy. The event, dubbed “An American-Russian Tribute to Jazz Diplomacy,” will feature Russia’s No. 1 jazz personality, Igor Butman. The Brubeck Institute Jazz Quintet will join with three Russian musicians to form the U.S.-Russia Rising Stars Jazz Band to play the same music Dave Brubeck performed at the 1988 Regan-Gorbachev summit in Moscow. The event is sponsored by American University’s Initiative for Russian Culture, The Open World Leadership Center, and the Brubeck Institute.

A tribute to Dave Brubeck is being planned for Dec. 6 at Take 5 at the Brew (157 W Adams St., Stockton) on what would have been his 93rd birthday.

About the Brubeck Institute

The Brubeck Institute was established by the University of the Pacific in 2000 to honor its distinguished alumni, Dave and Iola Brubeck. The mission of the Institute is to build on Dave Brubeck’s legacy and his lifelong dedication to music, creativity, education, and the advancement of important social issues including civil rights, environmental concerns, international relations, and social justice. The Brubeck Institute programs include the Brubeck Collection, Brubeck Festival, Brubeck Fellowship Program, Summer Jazz Colony, and Brubeck Outreach Program. Visit pacific.edu to learn more about the Brubeck Institute and University of the Pacific.