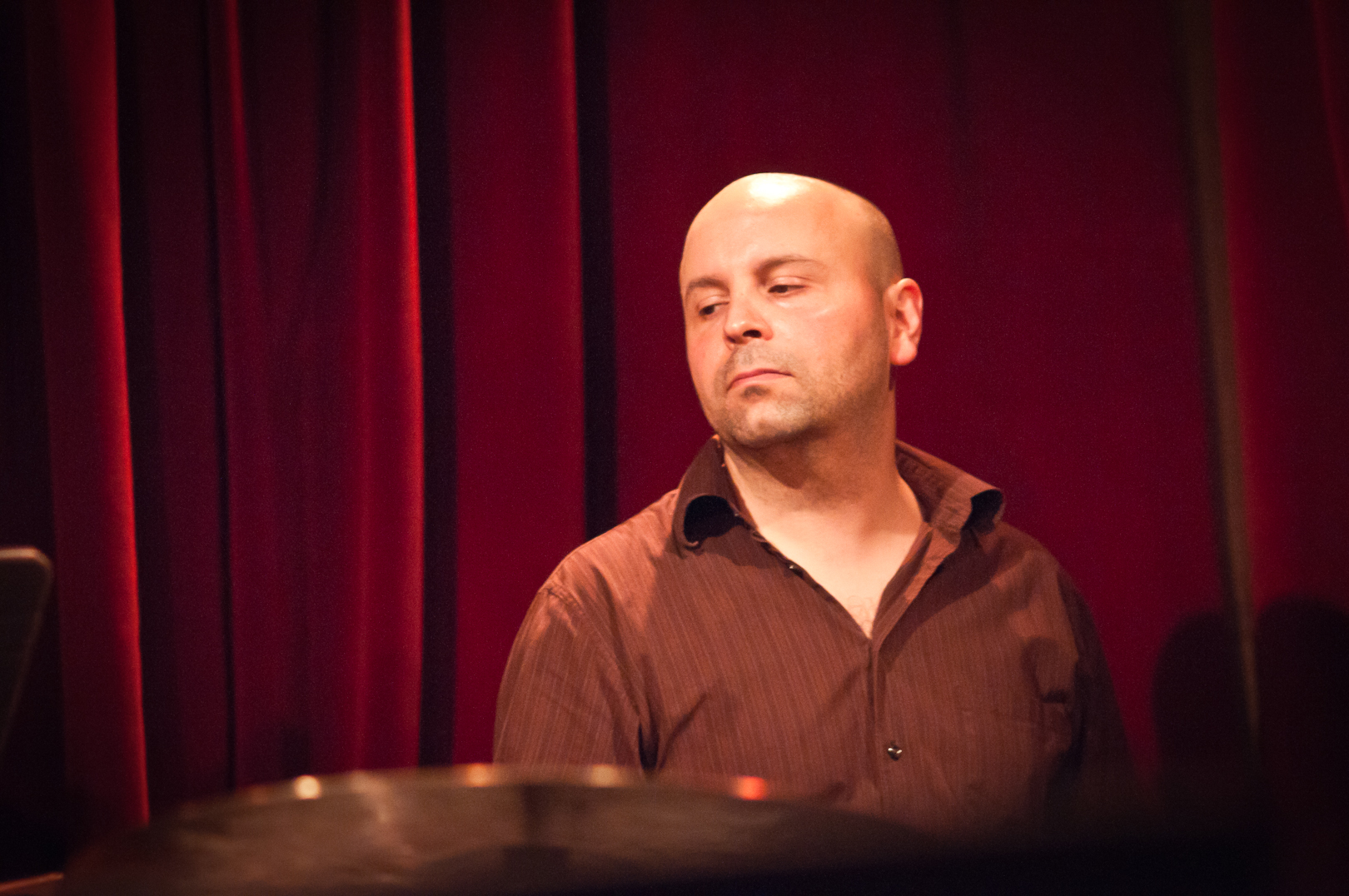 slideshow
"Brooklyn jazz is happening and those who venture across the bridge will be delighted by the hard-edged ethnically-flavored jazz that they find on the other side." &#151All About Jazz

“...The spirit of the organization is firmly rooted in Brooklyn. All of the members reside there, and they wanted to give a nod to the vitality of its scene." —The Wall Street Journal

Brooklyn Jazz Underground Records, which was launched in January of 2008, is poised to release the newest wave of recordings on the label, bringing it's extensive catalog to over forty releases; The Passion of Color, the third recording from New York native drummer/composer Rob Garcia; the sophomore album, Undercover, from Korean born, Brooklyn based pianist/composer John Chin; and Nomadic Nature, the debut recording from Barcelona-born, Brooklyn-based saxophonist/composer Gianni Gagliardi.

With a mix of new and returning artists releasing albums on BJURecords this year, including new recordings from Tom Guarna, and label co-founder, Anne Mette Iversen, the label continues to represent the current streams of jazz, creative and improvised music from artists connected to Brooklyn. The fall will see new releases from Owen Howard, The BJU Ensemble, David Cook, Nate Smith Big Band, Noah Garabedian, Rafal Sarnecki, and the artist collective, Sketches. As always, the label has taken a hands-off approach, adhering to their core principles of artist control & ownership, and giving priority to the artist's vision. BJURecords proudly offers the listener the newest recordings in the catalog, all singular, and linked by being contemporary explorations and representations of 21st century jazz in Brooklyn, NY.

Rob Garcia - The Passion of Color

Garcia has released four critically acclaimed albums as a bandleader, including Perennial (BJUR 012), voted one of the “10 Best Jazz Albums of 2009" by The New York Observer, and the critically acclaimed The Drop And The Ocean (BJUR 028). His group has performed at venues such as The Ottawa Jazz Festival, Iridium, Kitano, Smalls, The Rex, Cornelia Street Cafe and Firehouse 12. Garcia has also been the recipient of grants from Meet The Composer, DCA and NYSCA to support his performances. Now, on his brilliant fifth album, The Passion of Color, Garcia offers listeners yet another gem from his working group, The Rob Garcia 4 (formed in 2009), featuring Noah Preminger (tenor saxophone), Dan Tepfer (piano) and Joe Martin (bass).

The Passion Of Color features music inspired by impressionist paintings & music (such as Van Gogh and Debussy), and the passion that is evoked from the vast variety of colors and flavors of life found in works such as Lines In Impressions, Purple Brush and the title track. The Garden's Poet was born out of a trip to the Art Institute of Chicago where, “I saw and fell in love with the Van Gogh painting 'The Poet's Garden', explained Garcia. The Painter is a drum solo piece dedicated to Max Roach. Garcia elaborates, “Max has always been a strong influence and a huge inspiration, and I once heard Dizzy Gillespie refer to Max as 'The Painter'". Also on the album is Roach's composition, It's Time. The album concludes with the band's take on the Jimi Hendrix's classic, Little Wing. The music on The Passion of Color is characterized by rhythms that create the illusion of a fluctuating tempo or no tempo, while tightly orchestrated musical events happen in tandem. Strong melodies supported by pastoral harmonies and flowing rhythm lead the listener through the music.

Called “a prime mover in the current Brooklyn jazz scene", by Time Out New York, and “an adventurous drummer/composer with an elastic, resilient sense of time" by The Hartford Courant, drummer/composer Rob Garcia, who grew up in Pelham, NY, continues to be a strong presence on the NYC and international jazz scenes as an in-demand sideman and bandleader. Garcia is a musician who successfully straddles the trad-jazz and modern jazz camps, having performed/recorded with Wynton Marsalis, Woody Allen (playing in Allen's band for eight years), regular engagements with Vince Giordano & The Nighthawks (Garcia can be heard on much of the music for the hit HBO show, “Boardwalk Empire", including the Grammy winning CD, “Boardwalk Empire , Vol. 1"), and recorded “Bye Bye Blackbird" with Diana Krall for the film, “Public Enemies." Garcia is also an integral part of the modern jazz scene, working with creative stalwarts such as Joseph Jarman, Dave Liebman, Joe Lovano and many others. Garcia has played on over forty albums, and is a leading force in the successful “artist-run" movement as the founder and executive director of Connection Works, as a member of the Brooklyn Jazz Underground, and as a founding member of the Douglass Street Music Collective.

Pianist/composer John Chin's sophomore album, Undercover, boasts a unique approach to music that his working band, with Orlando le Fleming (bass) and Dan Rieser (drums), has cultivated over many years of gigs. Recorded live in one room in Brooklyn, with no preconceived arrangements and no edits, Undercover features original compositions from Chin, plus rhythmic, elastic, and ultimately singular takes on music from Ellington ("Caravan"), Shorter ("Edda" & “Fall"), Chaplin ("Smile") and Coltrane ("Countdown"). Chin explains, “All of the tunes began with some kernel that one of us came up with and we would just run with it. It really is a snapshot of the continuing evolution of the arrangements of songs that we had been playing over several years, and it struck me as being important to document what the trio had been working on. Undercover is all about instinct, the moment, just like our live performances. Every tune, even the original compositions are treated as frameworks for improvisation.

Pianistically, Chin has been working on polyphonic improvisation of late, broadening his technique in order to improvise several lines at the same time. Chin explains, “when I was a teenager, I got to hang out with the late, great Dorothy Donegan and she would show me what she was doing in spectacular fashion. I've also read about Keith Jarrett talking about this approach, and have heard Brad Mehldau execute it as well. You hear it all over the place in jazz and classical music actually. Art Tatum and Erroll Garner would pull it off all the time with a counter line in the middle of all this other activity and it would always floor me! In Bach, it's built in. And, some of my favorite moments in music have been found in the works of Rachmaninoff and Ravel. I'd been checking out all this stuff trying to soak it in and wanted to integrate it into my own playing. My approach to it is something relatively new and is something that I explore on Undercover."

John Chin, born in Seoul, Korea and raised in Los Angeles, was introduced to the piano at age four. He began studying jazz at California State University, which he attended at the age of fourteen as part of the Early Entrance Program for Gifted Students. Upon receiving his B.A. in Music at nineteen, Chin continued his musical studies at the University of North Texas, before pursuing a Masters of Music degree from Rutgers University (under the tutelage of master pianist and composer Kenny Barron), and an Artist Diploma from the world-renowned Juilliard School. His extensive experience in the classroom would lay the foundation for his own pedagogy; his experience and reputation have led to teaching opportunities the world over, while helping to sustain a New York studio of his own, located in Brooklyn's history-rich Prospect Park. John has performed internationally as a leader and sideman, at many major festivals, as well as some of America's most important and storied jazz rooms. He has shared the stage with Ron Carter, Benny Golson, Jaimeo Brown, Alan Ferber, Mark Turner, Marcus & E.J. Strickland, Dayna Stephens, Irvin Mayfield, Terrell Stafford, Donny McCaslin, Joel Frahm, John Ellis, Chris Cheek, Gregory Hutchinson, and Rudy Royston, among many others. Chin is a prolific composer, drawing inspiration from the jazz, pop, and western classical traditions, with two releases as a leader to-date: 2008's Blackout Conception, and his most recent project, 2014's Undercover.

Nomadic Nature, the debut CD from tenor saxophonist/composer Gianni Gagliardi, is comprised of original music charged with autobiographical stories of places and people that have impacted Gagliardi greatly. It is through his compositions that he reflects on the experience of being an artist with no fixed residence; a sojourner who roams the world with his horn in search of the next experience or encounter that will inform his art. Nomadic Nature features Gilad Hekselman (guitar), Luke Marantz (piano), Alexis Cuadrado (bass) and Mark Ferber (drums).

Gagliardi was born in Barcelona in 1987, and is now based in Brooklyn, NY. He began to study violin and baroque/renaissance flute, switching to saxophone at 14. Two years later he moved to the Netherlands to pursue a degree in jazz performance at the Conservatorium van Amsterdam. In 2009 Gagliardi studied at SUNY Purchase with Eric Alexander, Hal Galper and Arturo O'Farrill, leading to studies at Le Conservatoire National Superior de Paris. After moving to Boston to attend Berklee College, Gagliardi was awarded a presidential scholarship in 2012 to the new Berklee Valencia school as a Student/Ambassador, charged with performing for and promoting the college around the world, with appearances at the European Parliament in Brussels, the MIDEM Convention in Cannes, France and many others.

Gagliardi is the Director of the Barcelona Jazz Collective, a platform for rising musicians to produce and release albums, and has been invited to perform at prestigious international jazz festivals around the globe, such as The North Sea Jazz Festival, the Luxembourg Jazz Festival, Guatemala and Nicaragua Jazz Festivals and Eurojazz Festival (Mexico), as well as leading jazz venues, such as Bimhuis, Porgy & Bess Vienna, Jamboree. Gagliardi has also played in Europe, South America and USA with musicians such as John Clayton, Eric Alexander, Dick Oatts, Phillip Harper, Terell Stafford, Jorge Rossy and many others. Now, Gagliardi is determinedly making his mark on the Brooklyn/NYC scene with the release of his debut CD, Nomadic Nature.