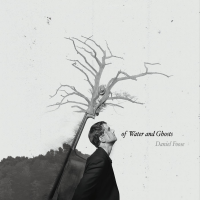 In 2015 bassist/composer Daniel Foose returned to his ancestral home of the Mississippi Delta to write an album of music at the crossroads of history, race, and the natural world. Joining Foose on this genre-defying, adventurous and beautiful album, of Water and Ghosts, is Sebastian Noelle on guitar, Keita Ogawa on percussion, Tomoko Omura and Maria Im on violin, Allyson Clare on viola and Jennifer DeVore on cello. “This ensemble, also called 'of Water and Ghosts', is a new outlet for my compositions. It consists of a traditional string quartet with percussion, guitar, and acoustic bass. The name refers to the historic forces that shaped the Mississippi Delta where this music was conceived and composed. It is an area where floods are regular, and fortunes are made and lost based on how much rain one may get in a particular season. Water has always been carving its way through the humanity of that place since it was first inhabited by people over 5,000 years ago. In addition to these natural forces, the forces of war, race, slavery, and history imbue this area with ghosts of the past that affect people in conscious and unconscious ways to this day. It is a land rich with stories and I hope to reflect that sense of story telling through this ensemble," said Foose. of Water and Ghosts will be available on Brooklyn Jazz Underground Records on October 7, 2016.

On of Water and Ghosts themes of racial injustice, conflict, and economic terrorism are juxtaposed against the backdrop of a serene and truly majestic natural setting. Foose explains, “I have attempted to reflect this duality musically through textures not typically heard together, notably employing grooves based on West African patterns, New Orleans street beats and Delta-style blues against the backdrop of sometimes sweet, sometimes dissonant string textures reflective of late romantic music."

Like the sculptures of Henry Moore or Richard Serra, or the architecture of Renzo Piano, Daniel Foose's compositional practice is one that, at it's best, is site specific. For his suite, “Sonora" from of Water and Ghosts (tracks 1-4), Foose composed music on the site of the former Sonora Plantation (in the Mississippi Delta) where his maternal ancestors have farmed for over a century. The piece narrates the story of the acquisition of Sonora and the injustices of slavery that were carried out in that place. The artist took his upright bass into the very fields, cemeteries and forests of the area, embracing and ingesting that environment, to compose the themes of the “Sonora" suite. It is his hope that these themes will be imbued with a sense of place that enrich the stories he's attempting to tell musically. He additionally did this for the collection of pieces entitled “Pluto" (tracks 5-9), about a plantation where his paternal family lives and farms. Staying on that land for a month, he composed music about the people of the area and their stories.

“Two lands separated by a few miles along the fertile crescent of the Yazoo River, have borne witness to the rise and fall of tribes from millennia ago, war, enslavement, terrorism, resilience, survival, faith, creation... the light in us struggling to overcome our own shadow. On the surface this land seems so quiet and flat, but dig just beneath the surface and the quietness gives way to a cacophony of voices and the flatness becomes textured as a tapestry of bones and memories. I spent a month listening to these voices and exploring this land, composing the themes for each piece in the very places that inspired them. As I improvised with my upright bass in the muddy fields and cemeteries of the area, these melodies very much felt like they came from outside of myself, gifted to me from the land." (excerpted from the liner notes for of Water and Ghosts)

Daniel Foose has performed all over the world with many different ensembles and is currently a member of Lady Gaga's Band. In 2013 Daniel was awarded 3rd place in the International Society for Bassists Jazz Competition performing his piece “Circuits (2012)."