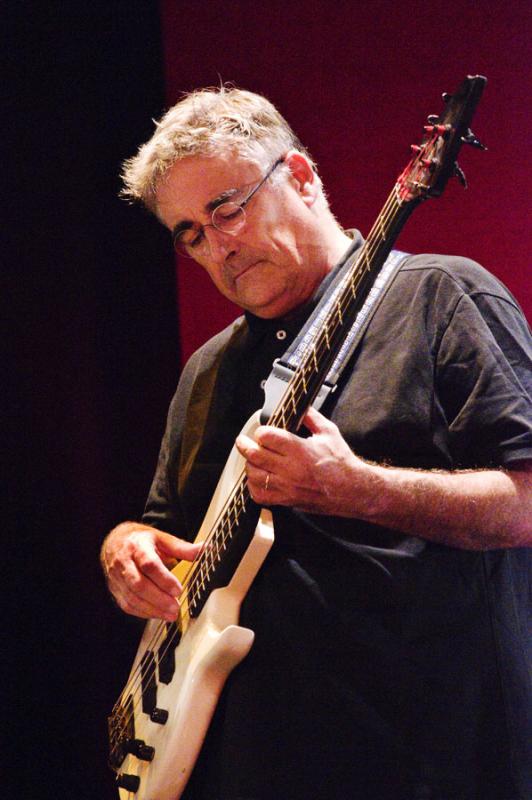 slideshow
Hello and welcome to the third edition of Brilliant Corners! You seem to be enjoying our little festival and we’re delighted to be back with another stellar line-up.

“We are pleased to present the 3rd edition of Brilliant Corners: a festival of jazz in Belfast, in this, the twentieth birthday year of Moving on Music. Modest though it may be, Brilliant Corners has proved to be a great success and we are delighted that so many music fans have supported us in our quest to bring alternative music to the city. This year we have even more input from local and Irish artists alongside their contemporaries from abroad. We hope you can make it along to Belfast's very own jazz festival from 25th to 28th of March and please enjoy Brilliant Corners responsibly!” - Brian Carson, Moving on Music CEO

If you have been before, you’ll know what to expect: Amazing, surprising, life-changing music. If you haven’t, we hope you’ll come along and experience Belfast’s only dedicated jazz festival in all its bijou glory!

“You can play a shoestring if you’re sincere” —John Coltrane

The 17 piece big band kick things off at Brilliant Corners, ensuring you go home with a spring in your step.

The Dublin City Jazz Orchestra (DCJO) is made up of some of the best musical talent in Ireland, led by the legendary Ciaran Wilde. Expect exciting tunes, humor, big noise and delicate sounds, all wrapped up in beautiful melody.

The programme for the night will include compositions by Irish jazz composers, arrangements of music from the Great American Songbook, along with Jazz Standards.

The DCJO began life in 2007, as a way of letting students at the Ballymun Wind Project in Dublin see and hear a big band in action. Since then the DCJO has gone from strength-to-strength, playing thirty-five concerts including performances at the Kilkenny Arts Festival, Cork Jazz Festival, Sligo Jazz Festival, Limerick Jazz Festival and two major concerts at the National Concert Hall.

There’s nothing quite like a big band, and there’s no big band quite like the Dublin City Jazz Orchestra! We’re delighted to be bringing this special group to Belfast for the very first time.

Brilliant Corners 2015 marks the debut performance of Meilana Gillard’s ‘Balance’, a brand new quartet made up of some of Europe’s finest young players and featuring the sonic landscapes of Gillard’s fearless pen. Storytelling melodies and image-conjuring textures are front and centre while celebrating all things discovered in the process of trying to achieve balance.

The Balance Playbook is a suite Gillard composed for a commission from Moving on Music and this is its premiere performance. She has written the new work with the strengths, individuality and creativity of her chosen musicians in mind.

Gillard, who has made a formidable impression on Northern Irish Jazz scene, is currently working on her 2nd album, to be released in May 2015.

“…Gillard has raised the bar for aspiring saxophonists with her flowing lines full of the storyteller’s powers of narrative.” – Ian Patterson, All About Jazz

Scott Flanigan is one of the foremost keyboard players on the Northern Irish jazz scene. He works both locally and nationally, performing with Van Morrison, Ulster Orchestra and Jean Toussaint to name but a few.

Steve Davis is a highly sought-after percussionist and drummer working with some of the top players on the London jazz scene such as Evan Parker, Django Bates, Ben Castle and Jacqui Dankworth.

Neil O'Loghlen is a member of the Louis Stewart Quartet, principal bassist of the Clare Memory Orchestra and performs regularly in a variety of settings across Ireland and the UK.

Combining contemporary, yet accessible original material with innovative takes on jazz standards, Flanigan’s trio is one of the freshest and most dynamic piano trios in Ireland.

Troyka are an experimental British trio who make rich and enthralling instrumental music. Featuring Kit Downes (once Mercury nominated in his own right) on keyboards, Chris Montague on guitar/loops and Josh Blackmore on drums, Troyka is far more than the sum of its parts and is definitely not your usual Hammond organ trio.

Ornithophobia is the London three-piece’s third studio album (their first under the Naim label) and truly marks the fruition of five years' worth of musical experimentation.

Influenced by the likes of Tim Berne, Aphex Twin, Deerhoof, Albert King and Flying Lotus, their music is intense, ambitious and radical. Unpredictable, yet catchy melodies, woven into complex time signatures may be a trade mark of the trio at full swing, but it is the flavours of textural beds, polyrhythmic post-dance, haunting trip-hop and atmospheric post-rock that make this record a sensation of the heart as well as the mind.

We’re thrilled to present Troyka once again having presented them in 2012. We can’t recommend this razor-sharp trio highly enough.

“Troyka are a force to be reckoned with; like King Crimson for the iPod generation.” - Time Out

“...the virtuosity and power of the jamming makes your hair stand on end."- Guardian ****

Human is a world-class quartet assembled by Irish-born drummer and composer Stephen Davis, who is joined by three of the most creative artists from the UK Improv scene.

The quartet is notable for its unusual instrumentation; with no bassist occupying the low-end, the music on the debut album, ‘Being Human’, feels like a crisp, tottering house of cards, ready to tumble at any time but held up by its own irrefutable sense of natural logic. In style and spirit, the music on Being Human is inspired by – and pays tribute to – the early masters of free jazz. But you’ll find no museum pieces here; this is vibrant, brash and lively free music, viewed from a fresh perspective.

It’s a challenge this stellar band is more than capable of meeting, the kind of preternatural interplay and instantaneous musical communication you’d expect from four musicians of this calibre. More than that, it’s a ready-made modern classic of avant-jazz.

“Quite a debut by drummer and composer Stephen Davis’ improv quartet coloured by the violin of the maverick Dylan Bates, the talismanic presence of pianist Alexander Hawkins, and the electronicist, trumpeter Alex Bonney" - Stephen Graham, Marlbank Jazz

A night of experimental electric guitar music exploring overtones and repetition, challenging the audience and the players to keep the count…

Two new pieces have been specially composed by Hornby (guitarist with acclaimed Belfast bands Continuous Battle of Order and We Are Knives) challenging up to 12 musicians to keep Up.

The first piece, for three, six, nine or more guitarists, divides guitarists into three groups, each moving to a mathematical score while trying to maintain their own space.

The second piece is for a minimum of six guitarists (ideally a dozen) working in pairs. Each duo appears to set off on a single path, with the whole group interconnecting and locking in at different surprising points.

GUITAR TRIO IS MY LIFE

Composed by Rhys Chatham in 1977, Guitar Trio (or ‘G3’) is a milestone in experimental music which influencing Sonic Youth and a generation of ‘no wave’ guitarists. Famously writing for hundreds of guitarists at once, Chatham’s score begins: ‘There are many ways to get overtones out of a guitar…’

Join Hornby and a gang of guitarists for a journey through one of the avant-garde’s most accomplished and entertaining pieces.

Multi instrumentalist, composer and improviser Fred Frith is one of the most prolific and versatile musicians of the last 50 years. Born in 1949, he first came to prominence as guitarist/violinist/pianist/xylophone player in the seminal band ‘Henry Cow’. During this time he also appeared as a guest on numerous other albums by the likes of Brian Eno, Robert Wyatt and Jade Warrior. He released his first solo album, ‘Guitar Solos’, in 1974, a collection of improvised or semi improvised pieces for electric guitar, usually modified or prepared in some way.

After Henry Cow, Frith embarked upon a career that would take him into all kinds of weird and wonderful places, appearing on over 400 albums including ‘Gravity’ and ‘Speechless’, which contain Frith's vision of dance music and some of the most enjoyable prog rock ever recorded. Frith was even the subject of Nicolas Humbert and Werner Penzels’ award-winning documentary film ‘Step Across The Border’.

Fred continues to record and perform all over the world, and has for over 40 years filled the space where rock and new music, meet.

Fred’s Brilliant Corners show will be solo improvisation performance and a rare opportunity to see the legendary musician perform.

David Stockard (Moving on Music’s 2015 ‘Musician in Residence’) is an improviser/composer from Carrickfergus, currently living in London. He tends to work collaboratively and has worked with a number of excellent artists and organizations locally and further afield.

Their collaboration came about when the two met in London late last year, and together play live, acoustic improvisation sets on percussion and trombone.

SAT 28 MARCH: GET THE BLESSIN

Formed in the year 2000, Bristol-based four-piece Get The Blessing (GTB) boast a truly international fan base and the last three years have seen them take their cellophane masks half way round the world and back.

Made up of Portishead rhythm masters Jim Barr and Clive Deamer, on bass and drums respectively, Pete Judge on trumpet and Jake McMurchie on saxophone, GTB have deftly ploughed their jazzy post-rock furrow since the release of All Is Yes back in 2008, daring enthusiastic comparisons to similarly inventive acts like Tortoise and Polar Bear.

2014 marked the much-anticipated release and tour of their 5th studio album Lope & Antilope. The record made use of sounds collected whilst on the road and was recorded in an empty pottery in Pembrokeshire. As the band put it: “the culmination of 4 days of recording, 3 years of gigging and 12 years of drinking tea and gin.”

Prepare to be teased, beguiled, soothed, spooked, jolted, and ultimately uplifted. We can’t think of a better band to draw Brilliant Corners to a close.

“The heavyweights of the contemporary Jazz scene” - The Independent

The Robocobra Quartet are undoubtedly one of the most exciting acts to emerge from Belfast in recent times.

Mining cultural influence both lyrically and musically, the group's recordings and live shows often feature re-arrangements and 'acoustically sampled' melodies from a spectrum of influences, ranging from Stravinsky symphonies to Colombian folk tunes and At The Drive-In melodies.