Brian Cruse Talks about His Composition “26.1” and the Release of "Brian Cruse Presents: B-Snaptet " 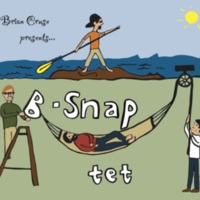 The only open table at the cafe on this unseasonably warm day is outdoors on the sidewalk. The awning doesn’t do any good, the afternoon sun angles beneath the canvas. Brian Cruse rifles through his messenger bag, looking for his shades beneath pages of sheet music.

The emotional core of the CD is a composition he wrote as a dedication to the runners and families impacted by the bombing at the Boston Marathon.

“That was such a heavy time,” Cruse said. “It was one of those times where something terrible happens and it’s close enough to you that you are really feeling the weight and emotion. You’re also realizing that there are other parts of the world that deal with this fear all the time.

“So I’m holding the guitar, thinking about the suffering at the finish line. Then my mind wanders to the times my dad had competed in the Boston Marathon back in the 90’s. You know, at a normal marathon there’s so much positive energy at the finish line but in 2013 it was just tragedy. I was sitting with all of that and the melody just started flowing,” Cruse said.

The final result is a meditative piece where all the band’s players contribute to the emotional intensity.

Brian Cruse plays double bass, Justin Smith is on guitar, CJ Wolfe plays drums and the saxophonist is Brendan Schnabel. The bandmates all show their considerable chops as musicians and composers throughout the CD.

“We’ve been playing together for years, so we’ve really grown to know and understand each other’s voice. I think you hear that spirit come together in this release,” Cruse said.

Their sound is rooted in a jazz foundation and draws from their musical backgrounds. Their songs offer hints of touchstone experiences in rock, hip-hop, funk, African and ethereal influences.

Smith’s “Side Steppin’” is a deep groove that walks with a light heart. Schnabel, currently completing a graduate degree at the University of Maryland’s School of Music, wrote several tracks including the soulful “Blues for Zarathustra.” Wolfe contributed the dreamy “Sandcastle Man.”

“Writing, recording and performing together has built a strong connection between us,” said Cruse. “You come to really support each other through those experiences.”

Next to the cafe table, the sidewalk is getting busier. Business people are walking home from work, parents are collecting children from a nearby school. Everyone is enjoying the unexpected warm weather. “It’s not every day that you get to do what you love, and have such strong support and connection. It’s great and it’s easy to take it all for granted.”