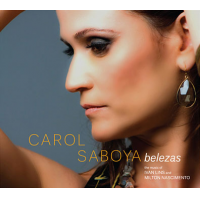 slideshow
Already established as a premier recording artist in her native Brazil and in Japan, with eight albums to her credit, vocalist Carol Saboya is poised to make her U.S. solo debut with the July 10 release of Belezas: The Music of Ivan Lins and Milton Nascimento. The CD, on the AAM Music label, features guest appearances by saxophonist Dave Liebman and harmonica master Hendrik Meurkens, and was produced and arranged by renowned pianist (and Saboya’s father) Antonio Adolfo.

Having previously recorded an album based on the Antonio Carlos Jobim songbook, Saboya decided on a different tack for the new recording. “I thought about great Brazilian composers who are known in the States, and Ivan Lins and Milton Nascimento made sense,” she says. “They’re modern in a way that’s not bossa nova. They have these great harmonies and beautiful melodies, and their music really lends itself to jazz.”

On Belezas Saboya sings in both Portuguese and English, including a new translation of Lins’s “Estrela Guia”—a paean to Nascimento—by the New York Voices’ Kim Nazarian that was commissioned by the composer especially for this project. Other Lins songs on the CD include “Abre Alas,” a 1970s-era song of protest against the Brazilian military dictatorship; “Doce Presenca,” with an English lyric by Jane Monheit; and “Soberana Rosa” (She Walks This Earth), which Carol sings in both English (lyric by Brenda Russell) and Portuguese.

Among the Nascimento songs are “Bola de Meia, Bola de Gude” (Sock Ball and Marbles), a lively baiao/maracatu that dates from early in Nascimento’s career; “Tarde,” one of his most magnificent ballads (with Dave Liebman featured on tenor saxophone); “Tres Pontas,” inspired by the train station in the small Minas Gerais town of Tres Pontas, where the composer grew up; and “Beleza e Cancao” (Beauty and Song), presented here in a Brazilian afoxe style.

As for the arranger’s tasks, “I tried to build this bridge between Milton and Ivan, so you can’t tell one from another,” Adolfo says. “I brought some of Ivan’s harmony style to Milton and vice-versa, those intervals of fourths pioneered by McCoy Tyner and Chick Corea. And in one of Ivan’s songs I use phrases from the first song that Milton presented at a festival in 1967. They have much in common. They came to the scene at the same moment, when there was a very strong musical movement.”

“Carol floats with the group with her supple dynamics and her soft, very energetic voice,” Adolfo says. “I asked the band not to play grooves like bossa nova. I wanted them to play very freely, and she’s like the fifth musician.”

In many ways, Belezas is Saboya’s reintroduction to America, as she spent several formative teenage years living in Los Angeles. The elder of Adolfo’s two musical daughters, Saboya, now 37, made her first recording at eight, but began her professional career as an adult on Sergio Mendes’s Grammy-winning 1992 album Brasileiro, recorded during the family’s Southern California sojourn. When the family moved back to Rio, Saboya continued to study and refine her craft, releasing an impressive debut album in 1997, Danca da Voz, which won Brazil’s Sharp Premio award for Best New Pop (MPB) Singer.

Saboya has released a series of acclaimed albums, including a 1999 session exploring the music of Jobim with guitarist Nelson Faria, Janelas Abertas. In 2007, father and daughter released the award-winning collaboration, Antonio Adolfo and Carol Saboya Ao Vivo/Live, a seductive set of Brazilian standards, and followed up with 2010’s La e Ca (Here and There), a session devoted to classic jazz tunes and American Songbook gems. It’s a Brazilian artist’s love letter to American jazz, a passion that Adolfo passed on to his daughter. (She also guested on two tracks of Adolfo’s 2011 CD, Chora Baiao.)

“There are many, many, many great composers here [in Brazil], and it’s an honor to be able to sing them,” Saboya says. “I can do something different with these songs. It took me a while, but I always knew that Ivan and Milton were there, waiting for me someday.”