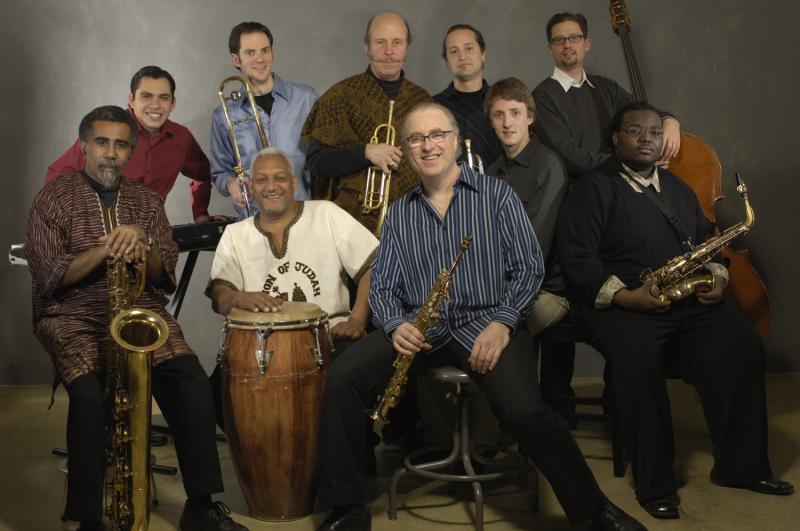 slideshow
The Either/Orchestra will celebrate the 25th anniversary of its first performance with a concert at Arlington's Regent Theatre on December 16 at 7:30 pm. Tickets are $25 ($15 for students), and are available at the Regent box office or regenttheatre.com.

The show will feature band founder Russ Gershon leading the ten current members of the E/O plus fifteen former members in a program which will span the band's repertoire of original compositions and often radical arrangements of jazz, with charts dating from 1985 to 2010. Over a quarter of the history of jazz itself, the Orchestra has been known for playing all styles from swing to fusion, with a healthy Latin tinge and a groundbreaking interest in Ethiopian music. Their omnivorous diet has taken them into the studio for eleven albums and around the world for over 1000 concerts.

As well as revisiting older material in its original arrangements, some of which have not been performed in decades, the expanded Orchestra will take advantage of such unusual configurations as five trombones, three basses, and multiple keyboards, sets of drums, and percussion.

With a wildly diverse array of players—some of whom will not meet until rehearsals&#151and styles, what can the audience expect on December 16, 25 years minus one day after the Orchestra's debut in the Children's Room of the Cambridge Public Library? Arts Fuse writer and former WBUR DJ Steve Elman summed it up in an article reviewing the band's latest CD, Mood Music for Time Travellers, and release party in September: “A unified aesthetic, a set of unspoken principles that animate Gershon's own music, inspire his collaborators, and keep the band alive: a commitment to collective effort that allows just enough individual virtuosity, a devotion to strong melodic lines, a wry wit, a love of excitement and surprise, a genuine fellow-feeling on the bandstand, and feedback from audience regulars that makes performances feel something like family reunions."

This special occasion will be a spirited union of many generations of musicians, ranging from 20 to 56 in age, from all over the U.S. and Latin America, who collectively make up the ongoing endeavor known as the Either/Orchestra. Many audience members have taken long stretches of the journey in step with the band and will know every tune, yet at every gig there are new listeners who are stunned and delighted that this world-class organization has been steadily going about its business in their neighborhood.