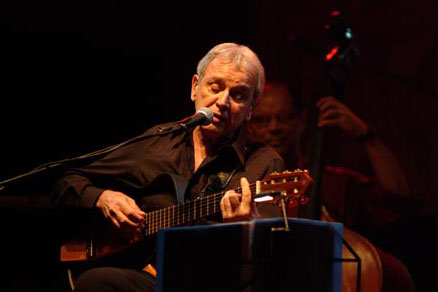 Forty years after it swept the world, Bossa Nova stands as as one of the enduring musical forms of the 20th century!

Marcos Valle, legendary Brazilian Composer/Keyboardist says, “Carlos Lyra is my idol. It is my great pleasure to join with him at my favorite Jazz Club, Birdland.”

While many of its architects—the creators of the sound, style, and form of Bossa Nova and Samba—are no longer with US, two of the greatest are coming to Birdland, one of the originals, and one who followed in his footsteps.

Lyra is from the important generation of Antonio Carlos Jobim who called Lyra “the King of rhythm, unique, unpaired and unmatchable, that his sambas and song will live on because of their quality, delicacy and depth—as long as there is music” His brilliance as a songwriter should not obscure his talent as a performer with his warm, sensual voice and an enormously influential guitar technique combined with a wit and musical sensibility as wide and warm as Brasil itself.

Valle has had a 50-year career, following in the footsteps of the Jobim/Lyra generation with over 500 songs to his credit recorded by the greats Sarah Vaughan, Chicago, Dizzy Gillespie, Oscar Peterson, Ramsey Lewis, Dave Brubeck, Toots Thielemans, Jay Z, Kanye West and so many more. Some of his hits include “Summer Samba”, “The Face I Love”, “Batucada”, and many others.

Most recently he recorded and performed with America’s Jazz talent Stacey Kent to great acclaim to celebrate his 50-year career. Valle travels the world and is returning to New York’s Birdland for the 5th time as he has become a crowd favorite. His talent as a Composer is matched by his charisma and musical talent as a keyboardist with vocal charm.

Lyra composed such standards as “Lobo Bobo”, “Maria Ninguem”, “Saudade Fez um Samba” ...introduced by legendary at the cornerstone of Bossa Nova, Joao Gilberto on his debut album “Chega de Saudade”, “Minha Namorada”, “Samba do Carioca”, “Coisa Mais Linda”, “Voce e Eu”, “Influencia do Jazz”, and “Maria Moita”. He wrote his first song as a teenager in 1954. Lyra was at Carnegie Hall in 1962 performing in the landmark concert that placed Bossa Nova firmly on the international stage and then performed at the Newport Jazz Festival with Stan Getz, the legendary tenor saxophonist who helped popularize the new wave of music from Brazil. Lyra and Getz went on to tour the world together.

VALLE and LYRA have been composing together over the years having written “Ate o Fim” (Till the End), recorded by the very talented Emilio Santiago as well as in the CD antitle “Os Bossa Nova”, featuring Carlos Lyra, Roberto Menescal, Joao Donato, and Marcos Valle.

The Producers welcome the opportunity to place on the stage at Birdland two of Brazil’s most important artists, Marcos Valle and Carlos Lyra to continue the legacy of Bossa Nova. The talented band consists of Patricia Alvi/vocal, Renato Massa/drums, Itaiguara Brandao/bass, & Jorge Continentino/sax & flute.