SOURCE: ALL ABOUT JAZZ PUBLICITY
June 2, 2014
Sign in to view read count 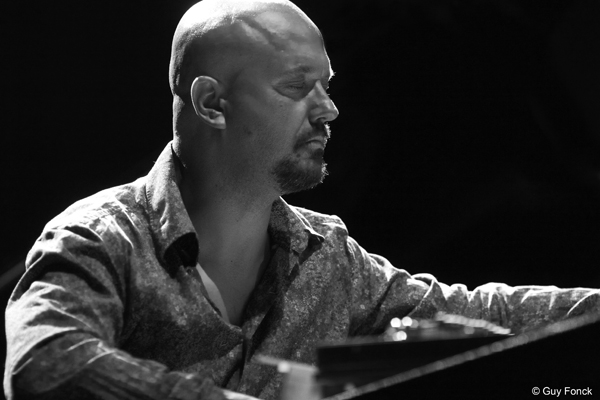 slideshow
After 25 years of lively collaboration and friendship, pianist/keyboardist Bojan Z and saxophonist Julien Lourau are going to record their duo! The duo was created at the Pannonica Club in Nantes, France, at the end of last century, in 1997 to be precise. Some of you still remember this perhaps.

17 years later, it seems relevant to us to fix these moments in a club as well – in this case at the Triton in Les Lilas, Paris – in the presence of our audience, in order to offer you this album. It’s a special area of exploration and creation in which we’ve been able to compose and reinterpret our respective repertoires with great joy.

That’s because it entails a new departure, a new way of working and because we would like to share this with all of you who’ve been following us for so many years. It is our wish to redefine the relation that connects us to you since long-time, by involving you in the process of making this album and, for sure, of many more to come. In spite of our experience and reputation, we haven’t been able to find a partner that would permit us to meet the quality requirements that we intend to put into this recording.

Because quality is the issue.

To those who know us, we have always insisted on giving you excellent sound and esthetic quality, both in our individual as in our common projects.

This implies an important investment starting by the recording itself and later in post-production. With this new approach, we would like to re-establish these quality standards and, at the same time, bring about a change in our way of producing our music, together with you.

Together we can do better, and only the best sounds good!

The story of Bojan Zulfikarpasic and Julien Lourau is mainly one of friendship, both personal and musical. Combing the Paris jazz clubs in the late eighties, they quickly found each other in the short-lived but legendary underground band called Trash Corporation, a sort of playground for these young mavericks where they would try out new ways and stretch musical boundaries.

During that same period, they both received their first professional awards. In 1990 Bojan wins the soloist’s prize at the Concours National de Jazz de la Défense, the most significant jazz competition in France, and in 1992 it’s Julien’s turn to do the same. It would be the kick-off of two careers filled with adventure, individual successes as well as projects on which they collaborated. Bojan and Julien have more in common than just belonging to the same generation. The same spirit of non-conformity unites them and they can both take pride in having left the straight and narrow during their respective careers, crossing geographical and musical borders, rejecting fixed formats and automatisms.

With a collaboration and friendship that has lasted for over twenty years, concerts are bound to be marked by their musical empathy. The listener is pulled in immediately and gets a real sense of the time that’s passed between them. There is a strong physicality to their playing; their music can be forceful and explosive, yet they leave room for introspection and humour as well. Their music is energetic, fluid, fierce but not brutal and without meaningless exuberance of notes. This is pure friendship, solid and uncompromising. What are the funds for?

The funds will serve for the production of the live recording of the album, in front of an audience at the Triton Club.

For this occasion we’re renting a Fazioli grand piano. Since 1999, almost all of Bojan’s albums were recorded on this magnificent instrument. In the rental fee are included the transportation and the daily tuning of the piano for all three recording days.

Furthermore, we find it very important to involve Thomas Zagami in this adventure. He’s the sound engineer who will be following us on tour.

Additional costs: € 1,850 (containing travelling expenses and meals of the persons involved, and the commission for Ulule)

Ah yes, we didn't to tell you yet: We intend to organize a “Rewards Party".

Only for you, for us, together.

To spend some time together, and to hand you your “rewards" in person. A unique concert and a great moment together with you.

For once, the audience will be the only nominee.

For € 2,000 more, we will be able to press our own vinyl, a unique specimen, unavailable on the market, so you will be the only ones to have it in your hands (and on your turntable).

A 180 Gr Vinyl edition, a collector's item, a piece of music fixed for a very long time to come.

Vinyl is beautiful, sounds great and truly corresponds to what we would like to offer you: pure happiness!

So why not go even further together?

For those wishing to contribute and for further details go to ulule.com