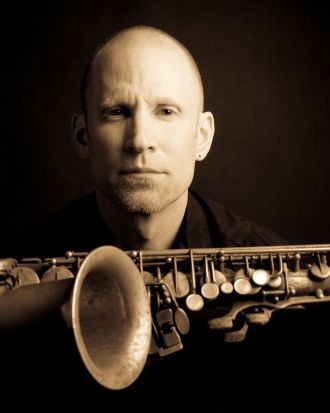 slideshow
"Is Selvaggio a better player, composer, or arranger? The answer to all three is yes, as this is a near-perfect recording."
--Mark Corroto, AllAboutJazz.com (8/21/07)

Playscape Recordings officially welcomes Cleveland-based saxophonist/composer Bobby Selvaggio to its roster with the August 28th release of his fourth CD as a leader, Unspoken Dialogue (PSR#080806). Selvaggio, who like fellow saxophonist and former teacher Joe Lovano is the son of a Cleveland jazz legend (pianist/accordionist Pete Selvaggio), is joined on this recording by pianist Kenny Werner, trumpeter Paul Tynan, bassist Ben Street, and drummers Matt Perko and Jamey Haddad.

“I strived to create a voice that can run through a wide range of styles, be fluid and connecting throughout the whole CD, and also be accessible," says Selvaggio of Unspoken Dialogue. “I wanted to keep a strong sense of the traditional, but also express myself and let the music evolve in a modern way. It helps, to say the least, that all the musicians came to make spontaneous and organic music. Even though we recorded in an old school way, rehearsing before we recorded, and with minimal (sometimes one) takes, there's an incredible band sense and togetherness in the music. And, everyone brought a personal and complimentary improvisational voice to these pieces, creating mini-compositions that utilize the melodic, harmonic, and rhythmic aspects of each one."

Critics have called Selvaggio “aspiring and gifted" (Bob Agnew, LA Jazz Scene) and “intensely creative" (Lee Prosser, JazzReview.com). The Cleveland Free Times' Chris Hovan adds, “Selvaggio plays with fluidity and a highly melodic sense of purpose that at times recalls the work of Phil Woods." A veteran of groups such as Joe Lovano's 52nd Street Nonet, the Cleveland Jazz Orchestra and the Vanguard Jazz Orchestra, he has performed across the United States and Canada both as a sideman and as a leader of his own groups. He is also a Conn-Selmer and Rico Reeds artist, an active teacher/clinician, and the founder of the Aurora Center for Jazz Studies in Aurora, Ohio. Unspoken Dialogue is the follow-up to his self-released 2005 quartet release, Visions Transitions.