SOURCE: SOMETHING ELSE!
March 9, 2011
Sign in to view read count 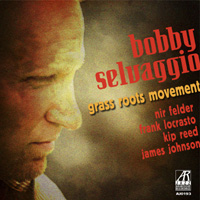 For a serious post-bop performer to take a leap into Grooveland, it can often be a risky bet. Will they be able to keep their artistic integrity? Will they even care? A couple of years ago, alto saxophonist Bobby Selvaggio made his second album (his first for the Arabesque Recordings label), leading a standard quintet that featured Kenny Werner through sophisticated modern jazz compositions all written by Selvaggio himself. Modern Times (2009) as that album is called, was a solid record, and showcased Selvaggio's aptitude for setting up challenges for himself and conquering them, while making it all sound easy. A tune from that album I wrote about for jazz.com, “Whirlwind,“ was one brilliant example of that.

Two years later, Selvaggio is back with Grass Roots Movement, released last month. Once again, Bobby leads a quintet for an Arabesque release that contains all original Selvaggio compositions. But there's a distinction with this all-new quintet, as this is an electric band that plays jazz with a bent for the groove. No worries, though: Selvaggio didn't sell out.

Helping out Selvaggio on this album are Nir Felder (guitar), James Johnson (drums), Kip Reed (eletric bass) and Frank LoCrasto (fender Rhodes). With the exception of fellow Cleveland homeboy Reed, the rest of the group were recruited from a stable of young fast risers of New York scene; Felder himself has seemingly come out of nowhere to be on this fourth album reviewed on this site, all within a span of about a year.

This is one tough unit, playing bop lines in the pocket on funk numbers like “No Turn On Red" and “Return To Sender" (not the Elvis song). Other tracks remain squarely in the straight jazz realm despite the presence of more contemporary instruments. “Chicken Legs" and “Spy Movie" are such songs where Selvaggio built some tricky rhythms and created detailed melodies around them.

Selvaggio must really like Felder's playing because he gets nearly as much spotlight as the leader. Felder takes the first solo on the first song, “No Turn On Red," where everyone except Johnson backs out, and the skilled guitarist is left to create melody as he's soloing. He passes the test with flying colors. His other notable solos are found on the empyrean “Dust Bunnies"—-the best ballad here—-and the propulsive “Return To Sender." Though the other players don't get solo opportunities quite as much, their supporting roles prove to be critical by creating the sounds and rhythms of contemporary jazz with the complexity and mystery of more advanced jazz. LoCrasto's Rhodes is delectable, creating a warm buffer zone between the lead players and the hard, sometimes off-kilter grooves of Reed and Johnson.

Selvaggio's own playing fits this style naturally, as even on Modern Times he showed sensitivity to complex rhythms. “Fish Food" is where he takes his own turn soloing with only the drums behind him, and on there and elsewhere he brings together the best facets from jazz—- soul, intelligence and swing—-into one voice. He can also play with intensity and focus, channeling melancholy moods like a real master as he does on “Signature Needed."

Some jazz exists to make you move, and others to make you think. Bobby Selvaggio's new disc Grass Roots Movement does both, making it the right jazz record to cue up for nearly all your jazz moods. visit Bobby's website here.