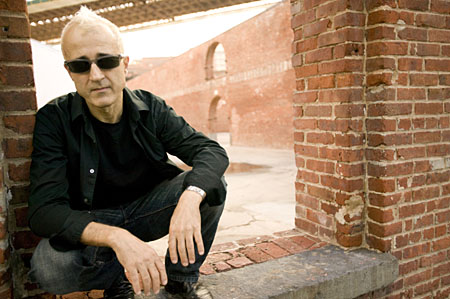 slideshow
New York, NY - On May 13, 2008 Palmetto Records will release Set the Alarm for Monday. For his first release on Palmetto Records, composer and drummer Bobby Previte brings us The New Bump, a logical musical extension of Previte's original Bump The Renaissance bands. Sonically intriguing and cinematically centered, Set The Alarm For Monday grooves as only Previte can.

Matt Balitsaris says: “To me the best records are those which are conceived as a single work, rather than simply a collection of songs. No one takes a more holistic approach than Bobby Previte. And nobody is more willing to throw out conventions and standard operating procedures to arrive at the sonic landscape he seeks. For that reason alone it's a joy to work with him, because you have to leave all of your regular processes behind, and learn to live in his world."

Ellery Eskelin “continues to be the most inventive American tenor player in creative music," according to DownBeat Magazine. Eskelin pushes the boundaries of exploring the use of the saxophone in unique contexts.

Vibraphonist Bill Ware is a staple of New York's downtown music scene. He has played with the likes of Steely Dan, Brad Jones, and E.J. Rodriguez. He also created a side project called Vibes, that specializes in dark, pulsating jazz-funk.

Bassist and composer Brad Christopher Jones has played alongside a wide array of artists including Ornette Coeman, Elvis Costello, Elvin Jones, Sheryl Crow, and Dave Douglas. His solid, inventive, and versatile playing on both the electric and acoustic bass has established him as one of the most sought-after musicians in the business.

The Village Voice calls Bobby, “A serious composer with the heart of a roadhouse rocker." Jambase.com says, “Like his music, he is hard, cool, indefinable, self-effacing, wryly sarcastic, and flat-out brilliant. Bobby Previte may be the genuine article of complete originality."

Set the Alarm for Monday will be available in stores nationwide and online at www.palmetto-records.com starting May 13th.

1. Set The Alarm For Monday
2. I'd Advise You Not To Miss Your Train
3. She Has Information
4. Were You Followed
5. I'm On To Her
6. There Was Something In My Drink
7. You're In Over Your Head
8. Drive South, Along The Canyon
9. Wake Up Andrea, We're Pulling In

Bobby Previte began his life in music as a great way to meet girls, but then fell in love with the drums instead. At thirteen, he fashioned his first set out of a rusted iron garbage can turned on its side (the bass drum), four upside-down rubber trash bins (the toms), a box with loose junk rattling around inside (the snare), three plungers with aluminum pie plates nailed on top, (the cymbals), and two pieces of linoleum crimped together, stuck through with a wire coat hanger wound into a spring, crowned with a rubber ball on top (the kick pedal)-and for hours on end would play to records in his dark basement with a lone spotlight shining on him. Eventually hired by a band, he rehearsed with them for a year, only to get fired the day of the first booking for not having “real" drums. After this experience he decided to strike out on his own, and has been doing so ever since.

He moved to New York City in 1979, with great fortune quickly met the leading lights of the “Downtown" scene, settled in, and never looked back. For twenty-five years he has remained a leader, widely hailed for his electrifying drumming and his stunning, unclassifiable compositions.

He has played an astonishing range of genres and venues, from the Palace Burlesque House in Buffalo, NY to country music at Gloria's Corral Club in the Kentucky backwoods (complete with, yes, a real corral surrounding the bandstand) to Carnegie Hall, and has presented his music at the major festivals around the world, from Europe to Russia, Japan to South America, and back.

The subject of articles in the world's major publications as well as in many books on music, Previte leads more bands than he probably should, and has added the electronic drums to his ever widening arsenal. He remains committed to form. And to beauty, in all its forms.