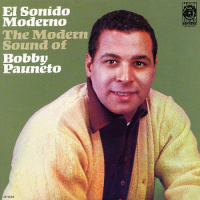 Vibraphonist Bobby Vincent Paunetto recorded only five known albums. El Sonido Moderno (1967), Paunetto's Point (1974), Commit to Memory (1976), Composer in Public (1996) and Reconstituted (1999). As a composer and arranger, Paunetto was highly regarded by all the Latin greats.

Born in 1944, Paunetto began playing vibes at 17 and became friends with vibraphonist Cal Tjader. He studied at Boston's Berklee College of Music from 1969 to 1973. In 1979 Paunetto was diagnosed with multiple sclerosis and gave up the vibes in 1981. Despite his illness growing progressively worse, he continued to compose and conducted just two albums in the 1990s.

Paunetto was born in Brooklyn to an Italian and Catalonian family. The Paunettos soon moved to the Bronx, where he experienced his mother's fondness for signing and dancing. His family spoke English at home, but his mother spoke enough Spanish that she  wrote lyrics to some of his singles. In the 1960s, Paunetto became familiar with the cha-cha-cha, the boogaloo and salsa through his brother, Ray, who danced regularly at the Palladium.

A shame Bobby Paunetto wasn't able to compose and arrange dozens more albums. He had a gorgeous touch. Paunetto died in 2010.