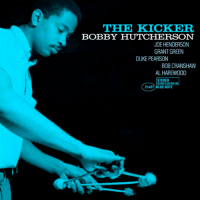 slideshow
It's unclear why Bobby Hutcherson's The Kicker wasn't released by Blue Note until 1999, despite being recorded in 1963. The album is flawless as far as I can tell. It swings, it's engaging, the musicians on the session were spectacular and there don't appear to be any instrumental errors or microphone snafus.

If I were guessing, I'd say the reason might have been because Grant Green recorded Joe Henderson's The Kicker on his Solid album in June 1964 (which then wasn't released until 1979) and Horace Silver record it on Song for My Father in October 1964, an album that wound up becoming a hit. Blue Note may have wanted to avoid having the Hutcherson and Green albums potentially cannibalize Silver's until they knew where Song for My Father would fare in the marketplace. Henderson didn't get around to recording his own song until 1967, for an album of the same name for Milestone Records.

Or it could have been because Green appeared on only three tracks on Hutcherson's album (was he late to the session?). This may have caused the album to sound instrumentally lopsided to producer Alfred Lion, at which point he decided to hold it. Who knows.

What we do know is that Hutcherson's The Kicker was recorded in December 1963 and featured Joe Henderson (ts), Bobby Hutcherson (vib), Duke Pearson (p), Grant Green (g), Bob Cranshaw (b) and Al Harewood (d). The album opens with the standard If Ever I Would Leave You, from Lerner and Loewe's Camelot. It was followed by the introspective Mirrors by Joe Chambers, a Hutcherson swinger; Hutcherson's hip, contemporary tribute to Duke Pearson called For Duke P; Henderson's The Kicker and Step Lightly (both major jazz accomplishments, with the latter being a favorite of mine), and Pearson's Bedouin.

There's something so hip and pleasing about Hutcherson and Henderson together. The sound of Hutcherson's vibes was like sprays of exclamation points while Henderson's saxophone sounds like watercolor paint on a slick surface. His tone moves around in such a fluid way and never dries. Uniting these two was Pearson's joyous piano and the rock solid time of Cranshaw and Harewood. Add Green on guitar and the fuse is lit.

Hats off to Michael Cuscuna for uncovering and liberating this album at the tail end of the 20th century when he was producing CD reissues for Blue Note. I can't even imagine this one sitting in a vault someplace forgotten.