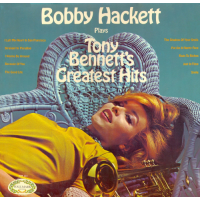 To the best of my knowledge, cornetist Bobby Hackett played on just two Tony Bennett albums in the 1960s. He can be heard blowing mellow obbligatos around Tony's vocal on two tracks on A Time for Love, a compilation of unreleased material between 1960 and '66. Hackett also plays ukulele on Sweet Lorraine on Tony's If I Ruled The World : Songs For The Jet Set.

All you have to do is hear Hackett's horn on The Shining Sea and The Very Thought of You from A Time for Love to ask yourself what the producers at Columbia were thinking. It's so obvious that Tony and Hackett should have recorded an entire album together. For whatever reason, they never did.

Instead, Columbia had Hackett record an album of songs that Tony made famous on its Epic subsidiary. The album—Bobby Hackett Plays Tony Bennett's Greatest Hits—was arranged by Frank Hunter and featured nine tracks: Smile, Put on a Happy Face, I Left My Heart in San Francisco, The Good Life, Rags to Riches, Just in Time, Stranger in Paradise, I Wanna Be Around, The Shadow of Your Smile and Because of You. Interestingly, the album came out the same year as Tony's A Time for Love.

For those unfamiliar with Hackett, he was a cornetist who came up in the 1930s as a devotee of Bix Beiderbecke and Chicago jazz. In the 1940s he was with Glenn Miller and Louis Armstrong. In the 1950s, he recorded a stack of Capitol albums under his own name that remain the very finest in mood-music recordings. He also was the wandering horn on virtually all of the Jackie Gleason Orchestra's easy listening albums. Few trumpets were as distinctly warm, melodically rich or as commercially successful.

Tony and Hackett were hardly strangers. As Tony wrote in his book, Life Is a Gift: “I first met Louis [Armstrong] through Bobby Hackett. Bobby and Louis both lived in another part of Queens, and on the occasion when we me, they came over to my house so Bobby could introduce us. In his characteristic growly tones, Louis said to me, 'I'm the coffee, but Bobby's the cream.' “