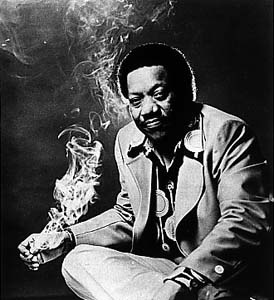 slideshow
On Saturday February 18th Blues legend Bobby Blue Bland will be performing from 8pm until 10pm at The Hamilton in Washington DC.

Ticket price ranges between 35 and 45 dollars and includes a special afterparty with the Linwood Taylor Band with special guest Sol Roots Roots. The Afterparty begins at 10:30pm.

The Hamilton is Washington DC's newest upscale music venue located at 600 14th St. NW. Designed to capture DC's creative renaissance and a food-savvy audience that draws influence from every corner of the planet, the Hamilton delivers a contemporary dining experience that's as eclectic as the talent in our music hall. Live music has a new home in the Nation's Capital. This uniquely designed, state-of-the-art Hamilton is where the musician and audience come together for an all-hours experience of entertainment and dining.

Bobby “Blue" Bland was born in the small town of Rosemark, Tennessee. Later moving to Memphis with his mother, Bland started singing with local gospel groups there, including amongst others the Miniatures. Eager to expand his interests, he began frequenting the city's famous Beale Street where he became associated with an ad hoc circle of aspiring musicians named, not unnaturally, the Beale Streeters.

Bland's recordings from the early 1950s show him striving for individuality, but any progress was halted by a spell in the U.S. Army. When the singer returned to Memphis in 1954 he found several of his former associates, including Johnny Ace, enjoying considerable success, while Bland's recording label, Duke, had been sold to Houston entrepreneur Don Robey. In 1956 Bland began touring with Little Junior Parker. Initially he doubled as valet and driver, a role he reportedly fulfilled for B. B. King and Rosco Gordon. Simultaneously, Bland began asserting his characteristic vocal style. Melodic big-band blues singles, including “Farther Up the Road" (1957) and “Little Boy Blue" (1958) reached the US R&B Top 10, but Bobby's craft was most clearly heard on a series of early 1960s releases including “Cry Cry Cry," “I Pity The Fool" and the sparkling “Turn On Your Love Light," which became a much-covered standard. Despite credits to the contrary, many such classic works were written by Joe Scott, the artist's bandleader and arranger.

The first single released from His California Album, “This Time I'm Gone For Good" took Bland back into the pop Top 50 for the first time since 1964 and made the R&B top 10 in late 1973. The lead-off track from Dreamer, “Ain't No Love In the Heart of the City," was a strong R&B hit. Later it would surface again in the rock world with a 1977 cover by Scottish progressive rock band Cafe Jacques (album Round the Back, CBS Records), and then in 1978 by the hard rock band Whitesnake featuring singer David Coverdale. Much later it was sampled by Kanye West on Jay-Z's Hip Hop album The Blueprint (2001).

In 1985, Bland was signed by Malaco Records, specialists in traditional Southern black music, who provided an empathetic environment and the singer has turned out a series of well-crafted albums in the ensuing years while continuing to tour and occasionally appear at concerts with fellow blues singer B. B. King. Irish singer-songwriter Van Morrison was an early adherent of Bland (he covered “Ain't Nothing You Can't Do" on his 1974 live album It's Too Late to Stop Now) and has on occasion had Bland as a guest singer at his concerts. He also included a previously unreleased version of a March 2000 duet of Morrison and Bland singing “Tupelo Honey" on his 2007 compilation album, The Best of Van Morrison Volume 3.

Known as one of the hottest blues guitarists based in the DC area, Linwood Taylor has worked with a wide range of artists including Albert Collins, Big Joe Louis, members of Bad Brains, as well as fronting his own powerful band. Linwood Taylor has led his own band for more than a decade. WAMMIES “Best Blues Band" for 1998, 1996, and 1993, the band appeals to a broad audience and has opened for Rock & Roll Hall of Fame Diva Etta James, and the Legendary Johnny Winter. Taylor has self-produced two releases, Live at Colonial Seafood and Take This and Stay Out of Trouble!!! A third will be out soon. Taylor assures us that “The Blues Is Alright"— day or night. His Blues guitar style blends Texas swing with a Hendrix flair that energizes audiences.

“Whenever musicians need a strong, reliable guitar, they frequently turn to the D.C. area's Linwood Taylor. The Virginia-based guitarist has guest-starred on albums by Bad Brains leader H.R. and Maryland harmonica player Anthony “Swamp Dog" Clark. He has shared the stage with Johnny Winter and opened for Johnny Copeland, Albert Collins, Lonnie Mack and Rory Gallagher, as well as touring with Joe Louis Walker. Linwood is a bluesman who unabashedly leans toward the rock side. As an up-and-coming professional musician, he caught the ears of members of bands led by the D.C. area's musical royalty: Roy Buchanan, Danny Gatton and the Nighthawks, among others “&#151Beldons Blues Point

Sol Roots is a fierce guitarist, bassist, and soulful singer who has toured around the world with many roots, funk, and blues legends. Sol and his band create a unique blend of energetic rock, raw blues, reggae, and funk, all delivered with deep soul. Sol Roots has performed at many premier festivals and venues across the east coast US, and the band includes musicians that have worked with Tommy Castro, Hobex, Corey Harris, Deanna Bogart, Jah Works, Mike Zito, Squirrel Nut Zippers and more. Paying homage to the greats, Sol seeks to push musical boundaries and bring Roots Music to a new generation of listeners.

“Sol's playing has been described as “musical glue," holding together many grooves and personalities. He has backed up legendary artists like Taj Mahal and Kenny Wayne Shepherd, opened for Robert Randolph, Wood Brothers, and has played with more obscure artists who have had unique perspectives and sounds. Though it all, he has learned many valuable lessons and is still able to hold on to the one thing that ties us all spiritually to one another—music." —Jeff Reid—The Beat Magazine