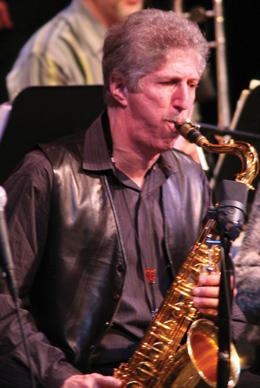 While organ was already being used in the 20s and 30s in jazz settings (Count Basie, Fats Waller), it wasn't until the late 40's that the “Hammond" organ trio got it's start with Wild Bill Davis. In the 50's we saw the emergence of a slew of great “B3" Players from Bill Doggett, Hank Marr, Jimmy McGriff, Groove Holmes, and the ever-popular Jimmy Smith. The sound of the Hammond B3 was and is so rich in overtones, and has the ability to sound like a much larger ensemble while maintaining the intimacy of a small band.

This richness in sound of the Hammond B3 combined with the close-knit feeling of the organ trio is what inspired me to do this recording. And when you put together a stellar band like this one, with Peter and Larry, all is well. The sound of the tenor, bass clarinet, and flute blends in such a warm way with the B3. It was a joy to play with these cats!

While much of the music is a nod to the older generation of organists, it must be acknowledged that subsequent organ players are in the mix as well. We must not forget Larry Young, Shirley Scott, Jack McDuff, Charles Earland, John Patton, Lonnie Smith, and Joey Defrancesco (who was supposed to do this date, and got stranded in Europe).

The music includes tributes to the various people and music I have encountered through the years. The tune “Thaddeu"s is for Thad Jones whose big band I played in briefly. “Canyon Cove" is a dedication to the rock band Emerson Lake and Palmer, and is named after the house we live on in Los Angeles (where Arnold Schoenberg once resided). “Bebop Special" is a dedication to the challenging art form I have worked on for most of my life. “Papa Lips" and “Mr. Fonebone" are two older tunes of mine that I play wit my big band. They work well in this format, I think. The tune “Bugaloo to You" is a tribute to the R&B- based music that many of the famous organ trios touched upon in their repertoire. The remainder of the songs draw upon the blues and jazz tradition.