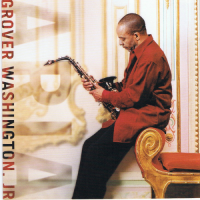 slideshow
Last week I caught up with saxophonist and pianist Bob Freedman, who arranged for Maynard Ferguson (And We Listened from Ferguson's Message From Newport) and plenty of other bands, including Toshiko Akiyoshi's sextet on United Notions (1958), which I posted about last Wednesday. Bob told me a wonderful story about arranging for Grover Washington Jr.'s Aria album. Aria was recorded in May 1999 and was Washington's last album before his death of a heart attack at age 56 in December 1999:

“Aria was comprised of operatic arias featuring Grover soloing mostly on soprano sax. Grover was quite enthused about the project, and we both thought it was just the beginning of a different direction for him. The album was done with with a 30-piece orchestra and came out great.

“Unfortunately, the orchestral arrangement I wrote for Amor ti Vieta (Love Forbids You), from Umberto Giordano's opera Fedora, with a libretto by Arturo Colautti, didn't come out as I had hoped. Everybody hated it, including me.

“But the record company [Sony Classical] still wanted the aria on the album so they decided to redo it the cheapest possible way—as a trio. The marvelous Billy Childs, the pianist on the original sessions, was in California by then and they didn't want to spend the money to bring him to New York. So I played piano and got into a musical mind-lock with [bassist] Ron Carter, who also had played on the orchestral sessions. I made a sketch of the piece, and after the first run-through with Grover, this was the only take. I love the recording every time I listen to it."

Bob continues: “"I wrote the arrangements and conducted the sessions. While the album is far from perfect, in our defense, we thought it was a first step toward something big. Grover was a master of the soprano. If we had had the chance to move onward, I believe the instrument would have been used more often and other saxophones would have been used more judiciously. I thought you'd enjoy the letter Grover sent me after the album was done. I treasure it!"