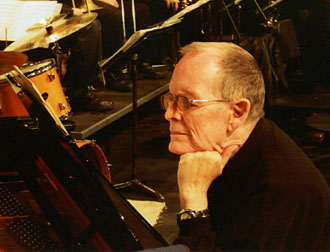 One of the most seductive and swinging West Coast big band arrangers of the 1960s and beyond was Bob Florence. Born in 1932, Florence was a quick study, taking piano lessons at age 4 and playing recitals at age 7. In college, he was studying to be a classical pianist when he fell in love with jazz orchestration, which is no wonder since he attended Los Angeles City College's music school, a cross-section of students studying classical and commercial composing and arranging.

Following college in the early 1950s, Florence became a freelance arranger, writing dozens of charts for bands. The turning point for him came in 1960, when he began arranging for Si Zentner, one of the few leaders who had a thriving big band in the pop-rock era. Florence arranged 11 of Zentner's album, coming to the attention of Dave Pell and other members of Liberty Records' A&R team. Forence arranged many of Liberty's big band albums in the 1960s, writing often for TV shows as well. In the 1970s and '80s, he led bands that played clubs in the Los Angeles area and recorded several gorgeous albums.

By the mid-1960s, Florence had developed an interesting expertise—turning teen pop songs into engaging jazz orchestral interpretations. These included several albums for World Pacific, including Joe Pass's A Sign of the Times and The Stones Jazz; Bud Shank's Michelle, Bud Shank and the Sax Section and Music From Today's Movies; as well as Florence's own Pet Project, featuring songs made famous by Petula Clark.

Here and Now remains a terrific entry point for those looking to enjoy Florence, who died in 2008.