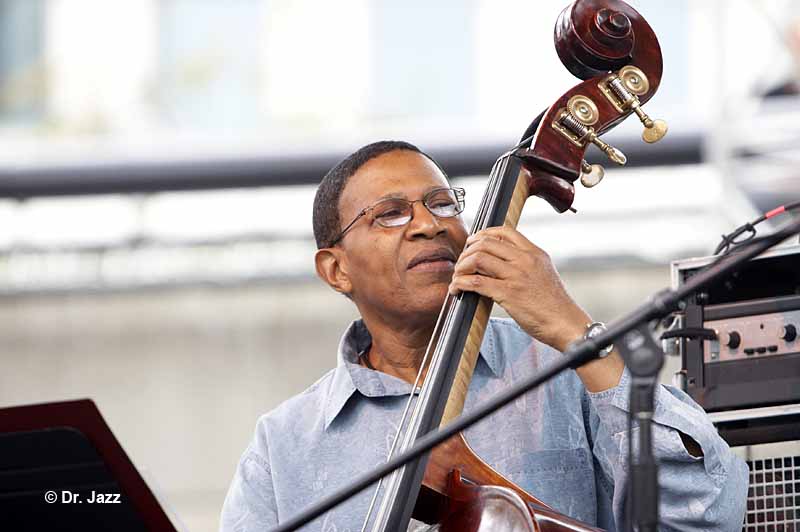 slideshow
Bassist Bob Cranshaw succumbed to bone cancer yesterday at his home in New York City. He was 83. He may be best remembered as Sonny Rollins’s bassist for more than half a century, but Cranshaw’s career also included mainstay work with Dexter Gordon, James Moody, Kai Winding, Wes Montgomery, Duke Pearson, Mose Allison, Oliver Nelson, and dozens of other musicians in the top ranks of jazz.

Sonny Rollins, for reasons unclear to me, prefers the electric instrument over what I irritate some of my bassist acquaintances by calling the real bass. Cranshaw uses the electric bass when he works with Rollins. He is one of the few players who comes close to persuading me that I’m hearing the real thing when he’s playing electric. Nonetheless, as well as he works that deception with Rollins, I get full satisfaction from his sound, attack and feeling when he’s on the good old standup, wooden, contrabass. It’s more profundo.

In this video from Dizzy’s Club in New York early this year, Cranshaw has an extended acoustic bass solo on Benny Golson’s “Killer Joe.” The band is drummer Joe Farnsworth’s quartet with Jeremy Pelt playing trumpet and Harold Mabern piano.

Now, for Cranshaw on electric bass, we go to Sonny Rollins in August, 1986 in a concert in suburban New York. There may be no better illustration of what Rollins loved about Cranshaw’s playing—drive, energy, harmonic perfection, complete involvement in the music. This is Sonny’s “G-Man” with Cranshaw; Clifton Anderson, trombone; Mark Soskin, piano; and Marvin "Smitty" Smith on drums. Would Rollins have soloed at such length if he hadn’t been supported by Cranshaw’s dynamism driving the rhythm section?