Bo Diddley His Life and Times 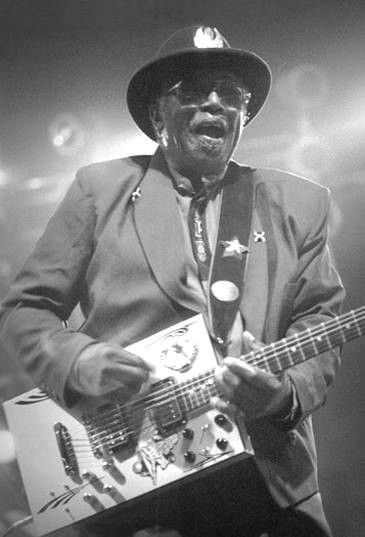 slideshow
Bo Diddley, a founding father of rock 'n' roll whose distinctive ”shave and a haircut, two bits” rhythm and innovative guitar effects inspired legions of other musicians, died Monday after months of ill health. He was 79.

Diddley died of heart failure at his home in Archer, Fla., spokeswoman Susan Clary said. He had suffered a heart attack in August, three months after suffering a stroke while touring in Iowa. Doctors said the stroke affected his ability to speak, and he had returned to Florida to continue rehabilitation.

The legendary singer and performer, known for his homemade square guitar, dark glasses and black hat, was an inductee into the Rock and Roll Hall of Fame, had a star on Hollywood's Walk of Fame, and received a lifetime achievement award in 1999 at the Grammy Awards. In recent years he also played for the elder President Bush and President Clinton.

Diddley appreciated the honors he received, “but it didn't put no figures in my checkbook. If you ain't got no money, ain't nobody calls you honey," he quipped.

The name Bo Diddley came from other youngsters when he was growing up in Chicago, he said in a 1999 interview.

”I don't know where the kids got it, but the kids in grammar school gave me that name,” he said, adding that he liked it so it became his stage name. Other times, he gave somewhat differing stories on where he got the name. Some experts believe a possible source for the name is a one-string instrument used in traditional blues music called a diddley bow.