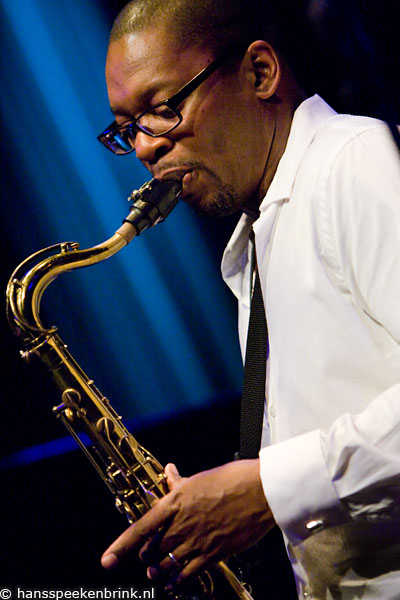 slideshow
EMI's Blue Note Records is proud to announce the signing of saxophonist, composer, and bandleader Ravi Coltrane. Coltrane will be entering the studio in December to record his debut as a leader for the label, which is due to be released in Spring 2011. Coltrane has previously recorded for the label as a member of The Blue Note 7, the all-star septet that released the album Mosaic: A Celebration of Blue Note Records and embarked on an extensive North American tour in honor of the label's 70th anniversary in 2009.

This Fall, Coltrane will be going out on a short run of U.S. tour dates with his quartet to prepare material for the new recording, including engagements at the Village Vanguard in New York (Sept. 21-26), Yoshi's in Oakland (Dec. 3-5), The Dakota in Minneapolis (Dec. 6-7), and the Jazz Showcase in Chicago (Dec. 9-12). In addition to a European tour with the Saxophone Summit in November, Coltrane will also be heading to London this month where he will be doing a BBC Radio 1 session and performing at the London Institute of Contemporary Arts with his cousin, the experimental hip-hop and electronic music producer Flying Lotus (born Steven Ellison), on whose acclaimed new album Cosmogramma Coltrane also appears. For a complete tour schedule please visit ravicoltrane.com.

“One of the things to admire about the saxophonist Ravi Coltrane is the slow methodical way he built his career," wrote Ben Ratliff in The New York Times, as he named Coltrane's Grammy-nominated album In Flux (Savoy Jazz) among his Top 10 albums of 2005. Ratliff went on: “In this quartet's sound lies an index of contemporary jazz in New York, making sense of great stylistic swaths."

Now, at the age of 44, Coltrane arrives at Blue Note Records (the label where his father John Coltrane made his landmark 1957 album Blue Train) a powerfully mature artist with a richly diverse, yet highly distinctive concept as both a saxophonist and a composer. His longtime quartet—with pianist Luis Perdomo, bassist Drew Gress, and drummer E.J. Strickland—has established themselves as one of the most consistently thrilling and acclaimed working groups in jazz today.

Born in Long Island, New York in 1965, the second son of Alice and John Coltrane, Ravi was named after the legendary Indian sitar player Ravi Shankar. When he was still young, the family moved to Los Angeles where he began to develop his own personal interest in the arts, starting as a clarinetist and eventually switching to the saxophone in high school. Coltrane went on to attend CalArts where he studied with Charlie Haden. In 1991, renowned drummer Elvin Jones was impressed by the young Coltrane's emerging talent and hired him to play in his band. He's gone on to perform with a remarkable list of artists including McCoy Tyner, Wayne Shorter, Herbie Hancock, Chick Corea, Jack DeJohnette, Carlos Santana, and many more. Coltrane has recorded five albums as a leader, including Moving Pictures (1998), From The Round Box (2000), Mad 6 (2002), In Flux (2005), and Blending Times (2009). He currently lives in Brooklyn, New York with his wife Kathleen and their two sons.