SOURCE: ALL ABOUT JAZZ PUBLICITY
September 19, 2017
Sign in to view read count 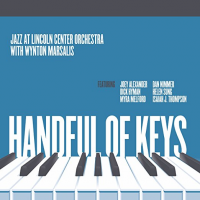 From rising stars to living legends, pianists Joey Alexander, Dick Hyman, Myra Melford, Helen Sung, Isaiah J. Thompson, and the Jazz at Lincoln Center Orchestra’s own Dan Nimmer grab hold of all 88 keys and reveal the full breadth of the piano’s evolution over the 20th century. With guests ranging in age from 13-year- old prodigy Alexander to 89-year-old American treasure Hyman, Wynton Marsalis and the JLCO survey jazz piano’s past and give the stage to several prodigies who are taking the instrument in bold new directions.

Handful of Keys captures the sold-out 2016-17 season opening concerts featuring the Jazz at Lincoln Center Orchestra with Wynton Marsalis and six virtuoso pianists representing the many styles of jazz and both the music’s past and its future. The title, Handful of Keys, references an efflorescent 1929 Fats Waller composition that is a signpost of early jazz piano. This release showcases a band in full “stride,” burning through electric arrangements of beloved compositions from James P. Johnson, Bill Evans, McCoy Tyner, and more.

“This concert demonstrates our ongoing commitment to the continuum and the belief in the non-segregation of generations,” says Wynton Marsalis, artistic and managing director of Jazz at Lincoln Center.

Blue Engine Records, Jazz at Lincoln Center’s platform that makes its vast archive of recorded concerts available to jazz audiences everywhere, launched on June 30, 2015. Blue Engine Records releases new studio and live recordings as well as archival recordings from Jazz at Lincoln Center’s performance history that date back to 1987 and are part of the R. Theodore Ammon Archives and Music Library. Since the institution’s founding in 1987, each year’s programming is conceived and developed by Managing and Artistic Director Wynton Marsalis with a vision toward building a comprehensive library of iconic and wide-ranging compositions that, taken together, make up a canon of music. These archives include accurate, complete charts for the compositions – both old and new – performed each season. Coupled with consistently well-executed and recorded music performed by Marsalis and the Jazz at Lincoln Center Orchestra, this archive has grown to include thousands of songs from hundreds of concert dates. The launch of Blue Engine is aligned with Jazz at Lincoln Center’s efforts to cultivate existing jazz fans worldwide and turn new audiences onto jazz. For more information on Blue Engine Records, visit blueenginerecords.org.

The 2017-18 season celebrates Jazz at Lincoln Center’s 30th anniversary. Since the first downbeat of its summer concert series in 1987, Jazz at Lincoln Center has been a vital part of the global cultural landscape. Jazz at Lincoln Center was established as an independent non-profit organization in 1996; opened Frederick P. Rose Hall, the “House of Swing”, in 2004, making it the world’s first venue designed specifically for jazz; and launched Blue Engine Records to share its vast archive of recordings in 2014. Over the past three decades, Jazz at Lincoln Center has become an important advocate for jazz, culture, and arts education globally, with a global audience of nearly 2 million people of all ages and experiences through concerts, webcasting, musical instruction, and distribution of music scores, the vast majority of which is free of change. To date, Jazz at Lincoln Center has produced more than 1,200 original concerts in the New York City area, with the Jazz at Lincoln Center Orchestra having performed in over 446 cities in 41 countries on five continents. This milestone season reflects on 30 years of celebrating the universal language of music and the influence of jazz in present day.