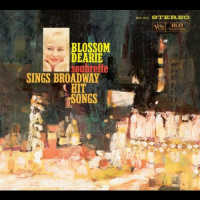 Russ Garcia probably wasn't the best choice to arrange Blossom Dearie's 1960 album, Soubrette Sings Broadway Hit Songs. The show tunes are dated for 1960 (most are from forgettable shows of the 1930s and '40s), many of the songs could be classified as novelty numbers, and the arrangements are too cute by half. In some respects, that was the fault of the album's concept. A soubrette is an actress or other female performer playing a lively, flirtatious role in a play. In other words, the corny songs were typically sung by a female performer lamenting about the show's love interest.

Why Norman Granz (above) at Verve thought this was a good idea for Dearie is beyond me. She was way more sophisticated than the painful, “dizzy dame" material she had to sweat through for the album. Compare this album with Jack Marshall's arrangements for Dearie on May I Come In?, her sole Capitol date in 1964. A world of difference.

But that's not the point of this post. For years, the musicians on Dearie's Soubrette sessions were a mystery. When jazz pianist Joe Alterman reached out to me recently wondering if I knew who was on it, I referred him to the American Federation of Musicians Local 47 in Los Angeles to see if they had the contracts for the sessions. Last week Joe emailed to tell me they did and he kindly shared them with me.

The February 19, 1960 session was held at United Recorders on Sunset Blvd. from 3 to 6:30 p.m. The songs covered were Guys and Dolls, The Gentleman Is a Dope, Napoleon, Rhode Island Is Famous For You, Always True to You in My Fashion (which is incorrectly listed as Always True You Darling) and Love Is the Reason. The musicians on the date were Al Harding, Jerome Kasper, Charles Gentry and Dave Pell (reeds), Paul Horn (fl), Jimmy Rowles (p), Red Mitchell (b), Mel Lewis (d), Larry Bunker (xyl), Gus Donahue (copyist) and Russ Garcia (arranger and conductor).

The February 22, 1960 session was done at the same studio and held during the same time period. On To Keep My Love Alive, Too Good for the Average Man, Life Upon the Wicked Stage, Confession, The Physician and Buckle Down Winsocki, the musicians were Al Harding (reeds), Paul Horn (fl), Barney Kessell (g), Victor Feldman (xyl), Red Mitchell (b), Mel Lewis (d), Gus Donahue (copyist) and Russ Garcia (arranger/conductor).

Now you know, thanks to Joe Alterman.